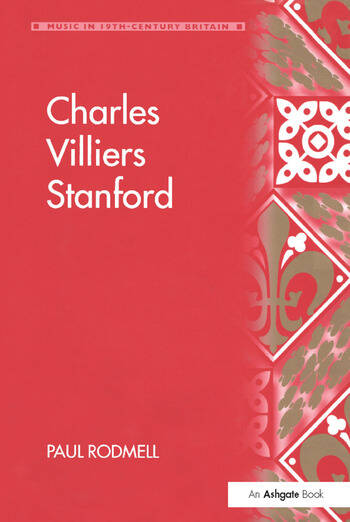 The first book devoted to the composer Charles Villiers Stanford (1852-1924) since 1935, this survey provides the fullest account of his life and the most detailed appraisal of his music to date. Renowned in his own lifetime for the rapid rate at which he produced new works, Stanford was also an important conductor and teacher. Paul Rodmell assesses these different roles and considers what Stanford's legacy to British music has been. Born and brought up in Dublin, Stanford studied at Cambridge and was later appointed Professor of Music there. His Irish lineage remained significant to him throughout his life, and this little-studied aspect of his character is examined here in detail for the first time. A man about whom no-one who met him could feel indifferent, Stanford made friends and enemies in equal numbers. Rodmell charts these relationships with people and institutions such as Richter, Parry and the Royal College of Music, and discusses how they influenced Stanford's career. Perhaps not the most popular of teachers, Stanford nevertheless coached a generation of composers who were to revitalize British music, amongst them Coleridge-Taylor, Ireland, Vaughan-Williams, Holst, Bridge and Howells. While their musical styles may not be obviously indebted to Stanford's, it is clear that, without him, British music of the first half of the twentieth century might have taken a very different course.

Contents: Preface; Life and Work: An Anglo-Irish childhood; Early years at Cambridge; From proud marriage to operatic fall; At Cambridge triumphant; A man about London town; Appendix: The relationship of the Fifth Symphony to Milton's L'Allegro and Il Penseroso; A long Edwardian summer; Last years; Appraisal and Conclusions: Stanford the pedagogue: conductor and writer; 'Damned ugly me bhoy' - Stanford the teacher; Stanford the composer: Every inch an (Anglo-)Irishman?; Reception, perception and legacy; Appendices; Bibliography; Index of compositions by Stanford; General Index.

’The depth of research, the understanding of the composer and his times and the scholarship are impressive...The writing style is commendable, eminently readable, and yet academic without dryness’. Church Music Quarterly '... excellent... quotes correspondence extensively, and adds valuable new emphases... intertwine the life and music well.' Church Times 'Rodmell [...] makes one feel that the music [...] is actually worth hearing.' BBC Music Magazine 'Excellent as this first part of the book is, the second is even better. Moving beyond the consideration of Stanford's works and personality, it examines, by way of an extended conclusion, his legacy as a teacher and composer. This departure from the standard life-and-works format is a masterstroke, and demonstrates the extent to which Stanford influenced developments in twentieth-century British music... Thanks to Paul Rodmell's book, we may begin to see Stanford and the renaissance in the historical and critical light they deserve.' Notes