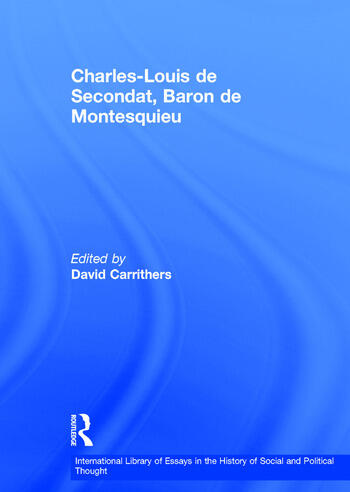 The French philosophe Charles-Louis de Secondat, Baron de Montesquieu (1689-1755) was a political and social thinker of enormous depth, range, originality, and influence. The essays by eminent scholars reprinted in this volume explore significant aspects of his contributions to political, constitutional, and religious thought during the epoch of the French Enlightenment. Topics highlighted include his Persian Letters (1721), his history of Rome (1734), and the views he expressed in The Spirit of Laws (1748) on natural law, forms of government, English constitutionalism, religion, commerce, international relations, and the philosophy of history. Supplemented by a detailed introduction that contextualizes the papers selected for this volume, as well as an extensive bibliography, this work serves as an authoritative reference to the best scholarship on Montesquieu's political thought. The volume is edited and introduced by David W. Carrithers, Adolph Ochs Professor of Government at the University of Tennessee at Chattanooga and author of numerous publications on Montesquieu.