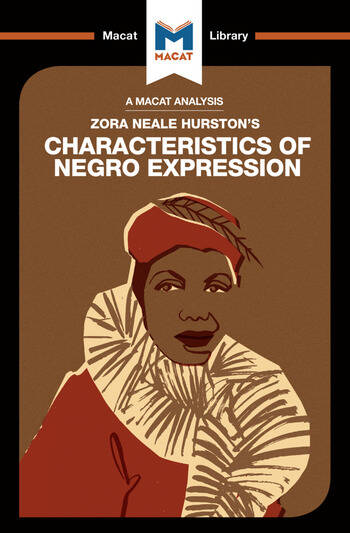 A critical analysis of African-American novelist and anthropologist Zora Neale Hurston' 1934 essay Characteristics of Negro Expression: A crushing evaluation of the many racial prejudices of 1930s America, including a common presumption that African American art was unoriginal – merely poorly copying white culture.

Hurston’s approach and premises may seem in many ways dated to modern readers, but the essay still shows an incisive mind carefully evaluating arguments and cutting them down to size. African-American art of the time did not – Hurston influentially argued – play by the same rules as white art, so it could not meaningfully be discussed by ‘white’ notions of aesthetic value.

Where white European tradition views art as something fixed, Hurston saw African-American art works as a distinctive form of mimicry, reshaping and altering the original object until it became something new and novel. In this way, she contended, African-American creative expression is a process that generates its own form of originality – turning borrowed material into something original and unique. By carefully evaluating the relevance of previous arguments, Hurston showed African American artistic expression in an entirely new light.

Who was Zora Heale Hurston?

What does Characteristics of Negro Expression Say?

Why does Characteristics of Negro Expression Matter?

Dr Mercedes Aguirre holds a PhD in American literature from University College, London. She is currently Curator of North American Published Collections at the British Library.

Dr Ben Lempert holds a PhD in rhetoric from the University of California at Berkeley for his research on form and voice in post-war American jazz and poetry. He has held a postdoctoral fellowship at Stanford and his research interests focus on the idea of "race" as it plays out in poetry, music, and fiction. Dr Lempert currently teaches college courses on literature, film, music, and writing.