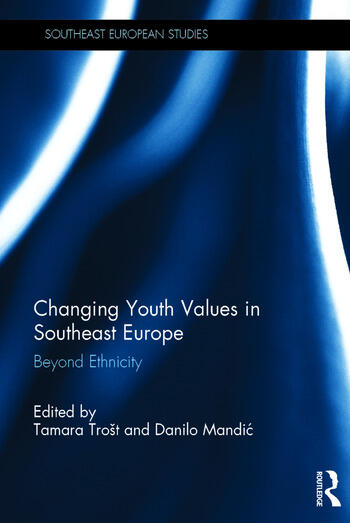 What shapes the cultural, political and ideological values of young people living in Southeastern Europe? Which identities matter to them? How are their values changing, and how can they be changed? Who is changing them? Europe’s periphery is the testing ground for the success of European values and identities. The future stability and political coherence of the Union will be determined in large measure by identity issues in this region.

This book examines the ways in which ethnic and national values and identities have been surpassed as the overriding focus in the lives of the region’s youth. Employing bottom-up, ethnographic, and interview-based approaches, it explores when and where ethnic and national identification processes become salient. Using intra-national and international comparisons of youth populations of Albania, Bosnia-Herzegovina, Croatia, Kosovo, Macedonia, Montenegro, Serbia, and Vojvodina, contributors uncover the mechanisms by which ethnic identities are evoked, reproduced and challenged. In addition to exploring political, regional cultural generational and class identities, the contributors examine wider questions of European unity.

This volume offers a corrective to previous thinking about youth ethnic identities and will prove useful to scholars in political science and sociology studying issues of ethnic and national identities and nationalism, as well as youth cultures and identities.

Chapter 1. Negotiating Identities in Post-Conflict Bosnia and Herzegovina: Self, Ethnicity and Nationhood in Adolescents Born of Wartime Rape

Chapter 2. Dual Citizenship and Youth Identity in Bosnia and Herzegovina

Chapter 3. Complexity of Inner Belonging: Notions of Belonging and Alienation among Adolescents with a Migrant Background in Croatia

Chapter 4. Constructing and Destructing the Ethnic: Discourses of Ethnicity among Hungarian Youth in Vojvodina

Chapter 6. From Foreign Mercenaries to Civic Activists: A Comparison of Youth Identity in Post Conflict Bosnia and Herzegovina and Macedonia

Chapter 9. Beyond Ethnic Identity: History, Pride, and Nationhood across Socioeconomic Lines in Serbian and Croatian Youth

Chapter 10. Out with the Old: Youth Solidarity and Nationalism among Young Kosovars and Serbs

Tamara P. Trošt is an Assistant Professor of Sociology at the Faculty of Economics, University of Ljubljana in Slovenia. She received her Ph.D. in Sociology from Harvard University in 2012, with a dissertation examining the interplay between history and ethnic identity among Croatian and Serbian youth. Her article ‘Ruptures and continuities in ethno-national discourse: Reconstructing the nation through history textbooks in Serbia and Croatia’ won the 2017 Nations and Nationalism Dominique Jacquin-Berdal prize. She has published on issues of everyday identity, populism, history textbooks, collective memory, and sports and nationalism.

Danilo Mandic is a College Fellow at Harvard University’s Sociology Department, where he teaches political sociology, comparative approaches to war and organized crime, and refugees and foreign policy. He received his BA from Princeton University and his PhD from Harvard University. For his dissertation, he conducted extensive fieldwork in Kosovo/Serbia and South Ossetia/Georgia. He is developing a book manuscript on the role of organized crime in separatist movements after the Cold War, and has led a research team to investigate the Syrian refugee crisis on the Balkan Route.