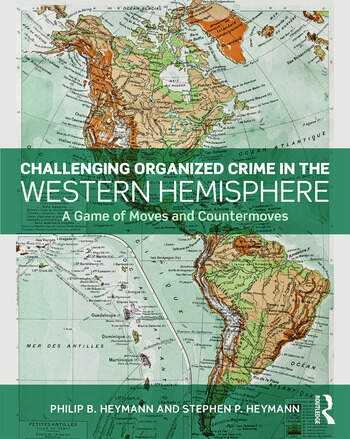 Challenging Organized Crime in the Western Hemisphere: A Game of Moves and Countermoves

Challenging Organized Crime in the Western Hemisphere: A Game of Moves and Countermoves takes the unusual approach of exploring and describing how organized crime groups develop their capacities in response to heightened powers of law enforcement; and how law enforcement in turn responds, creating an ongoing dynamic interaction. The book shows how a state, such as the United States, has and can develop new laws and practices in ways that enable them to deal with relatively large violent groups—and yet preserve the rule of law and civil liberties.

While most texts describe organized crime groups and the challenges to government they impose from a static perspective, the authors dissect the interaction over time of organized crime and democratic governance that has created the present structure and balance of advantages in the United States. Readers learn about the markets for contraband and extortionate protection that form the bulk of organized criminal enterprise, the vulnerabilities of the traditional practices and rules of law enforcement, the effects of globalization of criminal enterprises on their contest with the state, the effectiveness of various practices of law enforcement, and the continuing forces of change, often technological, in the businesses of organized crime and law enforcement that play important roles in the contest between them.

This thought- provoking book is ideal for students of organized and transnational crime in university programs and law schools, as well as researchers and legal practitioners, who seek to look beyond the simple traditional history of organized crime and develop a strategy to confront organized crime in the future.

Part One: The Business of Organized Crime: The Concerns of States

1. What is Organized Crime?

2. The Sinaloa Cartel as a Concrete Example

4. A Final Issue of State Strategy:  Rules of War or Law Enforcement.

6. The Mechanisms and Difficulties of Traditional Law Enforcement in Addressing Organized Crime

7. Creating a Law Enforcement Capacity to Address the Advantage of Organized Crime

12. The Colombian Connection:  A Truly Cooperative Solution for an International Problem

Part Four: Moving the Proceeds of Organized Crime in Secret

14.  Moving Proceeds of Crime without Revealing Their History

15. The Limited Effectiveness of a Barrage of Prohibitions of Money Laundering

16. The Internet and the Exploitation of the “Fog of War”

17. Conclusion:  Predicting the Future of the Contest Between Nations and Sizable Criminal Enterprises

Philip Benjamin Heymann is the James Barr Ames Professor of Law Emeritus at the Harvard Law School. After graduation from Harvard Law School he clerked for U.S. Supreme Court Justice John Marshall Harlan. At the U.S. Department of Justice he was then Assistant to the Solicitor General (1961-1965), Assistant U.S. Attorney General in charge of the Criminal Division (1978-81) and Deputy Attorney General (1993-94). At the U.S. Department of State (1965-1969), he was Acting Administrator of the Bureau of Security and Consular Affairs, Deputy Assistant Secretary of State for the Bureau of International Organizations and Executive Assistant to the Undersecretary of State.

During his career, Stephen Heymann was a member of the Justice Department’s elite Organized Crime Strike Force; established and directed one of the country’s first, dedicated cybercrime units and was Deputy Chief of the Criminal Division of the U.S. Attorney’s Office in Boston, where he advised on all aspects of investigation and case structuring. Among his significant cases, he led what the FBI then described as one of the most significant Asian Organized Crime cases in its war against non-traditional organized crime; conducted the first court-authorized wiretap of a computer network, resulting in identification and charging of a foreign national breaking into U.S. military systems from Argentina; and successfully investigated a transnational group engaged in stealing tens of millions of credit and debit cards from TJX and other major US retailers. The last was described by the Attorney General of the United States as the largest and most complex identity theft case then brought in the country.

Challenging Organized Crime in the Western Hemisphere: A Game of Moves and Countermoves