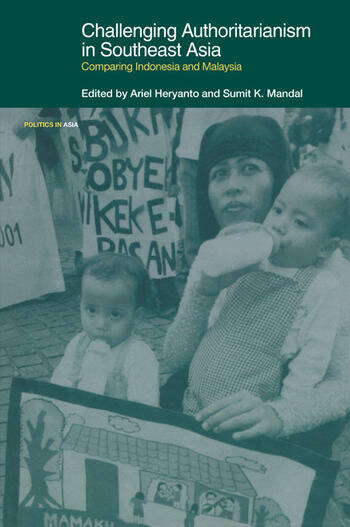 Challenging Authoritarianism in Southeast Asia is one of the first substantial comparative studies of contemporary Indonesia and Malaysia, homes to the world's largest Muslim population. Following the collapse of New Order rule in Indonesia in 1998, this book provides an in-depth examination of anti-authoritarian forces in contemporary Indonesia and Malaysia, assessing their problems and prospects. The authors discuss the roles played by women, public intellectuals, arts workers, industrial workers as well as environmental and Islamic activists. They explore how different forms of authoritarianism in the two countries affect the prospects of democratization, and examine the impact and legacy of the diverse social and political protests in Indonesia and Malaysia in the late 1990s.

Ariel Heryanto is Lecturer at the Melbourne Institute of Asian Languages and Societies, The University of Melbourne. Sumit K. Mandal is Research Fellow at the Institute of Malaysian and International Studies, Universiti Kebangsaan Malaysia.

'It does not provide any blue print for the future but it does provide valuable insights into the present - insights that are necessary for a more accurate view of the socio-political situation of the two countries.' - Options

'Ariel Heryanto, Sumit Mandal and their co-writers are to be congratulated for the publication of this important book ... it offers the reader a serious and in-depth evaluation of the socio-political implications of the [reformasi].' - The Jakarta Post

'The well-researched material detailing some of the political and social dynamics at work within Indonesian and Malaysian civil society in the last decade are a significant contribution to our understanding of this period of great change.' - Intersections (Murdoch University)

'The editors and contributors have skilfully maintained their focus on the issue while successfully avoiding the obvious danger of digressing.' - Tempo

'Contributors are local scholars who themselves have had direct personal involvement with the activism discussed. This is not a book written by armchair academics in a far-away air-conditioned ivory tower.' - The Nation

'Together, the six essays and the incisive introduction provide some new ways of looking at authoritarianism in the region.' - Contemporary Southeast Asia