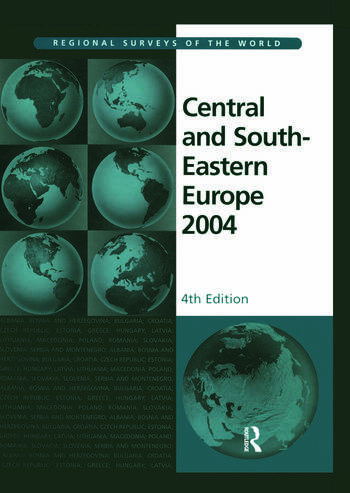 A comprehensive survey of all the countries and territories of Central and South-Eastern Europe, presenting the latest economic and political developments.
* Includes expert comment on issues of regional importance, up-to-date statistics, a directory of institutes and companies and political profiles
* Provides an impartial and current perspective on economic and political developments
* Over 750 pages of authoritative analysis, current statistics, directory data and biographical details.

General Survey
* Leading authorities on the area analyse topics of regional interest. Subjects covered are: Central and South-Eastern European Economies; Social Policy and Welfare in Central and South-Eastern Europe: Legacies, Trends and Choices; Religion in Central and South-Eastern Europe; Minorities in Central and South-Eastern Europe; The Baltic Sea Region; The Former Yugoslavia After Milosevic; The Macedonian Question and The Environmental Dimension of Transition in Central and South-Eastern Europe
Country Surveys
Individual chapters on every country containing:
* An introductory survey, containing essays on the geography, recent history and economy of each country, which includes a map and full chronology
* An extensive statistical survey of economic indicators, which include area and population, health and welfare, agriculture, forestry, fishing, mining, industry, finance, trade, transport, tourism, media and education.
* A full directory containing names, addresses, contact numbers and e-mail and internet addresses for the following areas: the constitution, the government, legislature, local government, political organizations, diplomatic representation, the judiciary, religion, the media, finance, trade and industry, transport, tourism, culture, education, social welfare, the environment and defence
* A useful bibliography, providing sources for further research.
Political Profiles
* Biographical details on the leading figures in the region.
Regional Information
* Details of the membership, structure and activities of the principal international organizations operating in the region.

'This is an impressive reference work providing an impartial and invaluable guide to the politics, economy and history of the region' - European Access Plus