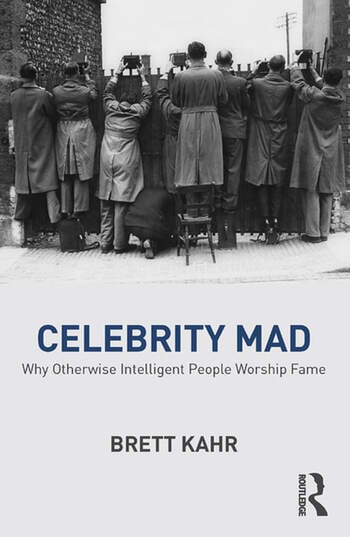 This short book by Professor Brett Kahr provides a psychoanalytic understanding of fame and celebrity in the early twenty-first century, building upon the bedrock foundations of the Freudian corpus.

The book is divided into six chapters. Chapter One explores the psychology of the celebrity, questioning narcissistic and exhibitionist psychopathology, while Chapter Two examines the psychological state of those of who revel in the fame of others and in celebrity culture more broadly, and offers a discussion of the "Celebrity Worship Syndrome". Chapter Three provides a very brief history of the concept of celebrity itself, arguing that, contrary to popular opinion, the culture of celebrification cannot be blamed on twenty-first-century media moguls, but, rather, that such a preoccupation with famous personalities can be traced back to ancient times and demonstrates the need to broaden our analysis to include the role of deep, unconscious psychological forces. In Chapter Four, Kahr reviews some important theoretical concepts advanced by Freud and Winnicott, which provide an important foundation for the psychoanalytic study of fame, while Chapter Five provides a more comprehensive theory of the unconscious psychological roots of the need to worship fame and to seek it, drawing upon a multitude of sources, ranging from psychoanalytic theory and developmental psychological research, to film, archaeology, and, perhaps surprisingly, the history of infanticide. The book concludes, in Chapter Six, by studying the psychodynamics of celebrity and fame, arguing that being recognised by one’s family and friends in the intimate context of home life may well be the very best way to become a celebrity.

outlines a psychoanalytic theory of the roots of our obsession with fame. It will be of great interest to psychoanalytic practitioners and researchers, as well as to readers interested in the psychology of fame.

Professor Brett Kahr has worked in the mental health field for over forty years. He is Senior Fellow at the Tavistock Institute of Medical Psychology in London and Senior Clinical Research Fellow in Psychotherapy and Mental Health at the Centre for Child Mental Health in London. A Trustee of the Freud Museum London and of Freud Museum Publications, he has written or edited fourteen books, and he has served as series editor for more than fifty-five other titles. He is Consultant Psychotherapist at The Balint Consultancy and works full-time with individuals and couples in London.