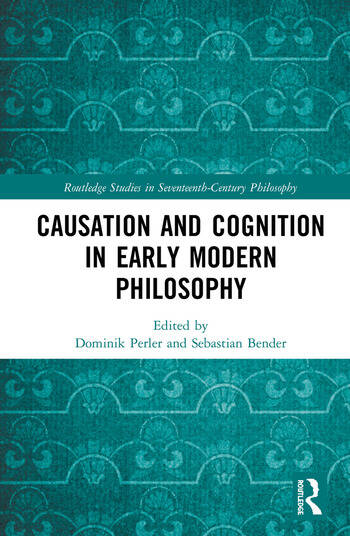 This book re-examines the roles of causation and cognition in early modern philosophy. The standard historical narrative suggests that early modern thinkers abandoned Aristotelian models of formal causation in favor of doctrines that appealed to relations of efficient causation between material objects and cognizers. This narrative has been criticized in recent scholarship from at least two directions. Scholars have emphasized that we should not think of the Aristotelian tradition in such monolithic terms, and that many early modern thinkers did not unequivocally reduce all causation to efficient causation.

In line with this general approach, this book features original essays written by leading experts in early modern philosophy. It is organized around five guiding questions:

2. Descartes on the Causal Structure of Cognition

4. Causation and Cognition in Malebranche

6. Nothing Is Simply One Thing: Conway on Multiplicity in Causation and Cognition

7. Cavendish on Material Causation and Cognition

8. The Mechanical Mind: Hobbes on Sense Cognition and Imagination

9. Knowing Mind through Knowing Body: Spinoza on Causal Knowledge of the Self and the External World

10. The Many Faces of Spinoza’s Causal Axiom

11. Locke on Causation and Cognition

13. John Sergeant and Antoine Le Grand on the Occasional Cause of Cognition

16. Reid on Intentionality and Causation

Dominik Perler is Professor of Philosophy at Humboldt-Universität, Berlin, and Member of the Berlin-Brandenburg Academy of Arts and Science. His books include Partitioning the Soul: Debates from Plato Leibniz (ed., 2014), The Faculties: A History (ed., 2015), Feelings Transformed: Philosophical Theories of the Emotions, 1270-1670 (2018).

is Lecturer at the philosophy department at Humboldt-Universität, Berlin. His research focuses primarily on early modern philosophy, in particular on the metaphysics and philosophy of mind of this era. In 2016, he published his first book, Leibniz’ Metaphysik der Modalität.