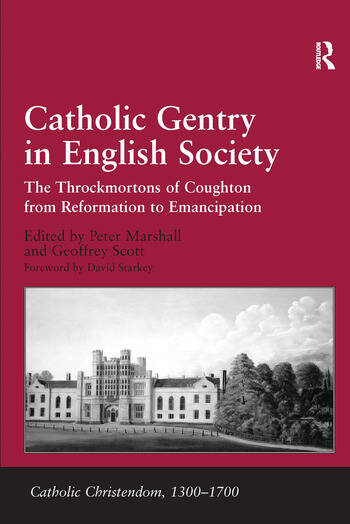 Catholic Gentry in English Society: The Throckmortons of Coughton from Reformation to Emancipation

This volume advances scholarly understanding of English Catholicism in the early modern period through a series of interlocking essays on single family: the Throckmortons of Coughton Court, Warwickshire, whose experience over several centuries encapsulates key themes in the history of the Catholic gentry. Despite their persistent adherence to Catholicism, in no sense did the Throckmortons inhabit a 'recusant bubble'. Family members regularly played leading roles on the national political stage, from Sir George Throckmorton's resistance to the break with Rome in the 1530s, to Sir Robert George Throckmorton's election as the first English Catholic MP in 1831. Taking a long-term approach, the volume charts the strategies employed by various members of the family to allow them to remain politically active and socially influential within a solidly Protestant nation. In so doing, it contributes to ongoing attempts to integrate the study of Catholicism into the mainstream of English social and political history, transcending its traditional status as a 'special interest' category, remote from or subordinate to the central narratives of historical change. It will be particularly welcomed by historians of the sixteenth through to the nineteenth century, who increasingly recognise the importance of both Catholicism and anti-Catholicism as central themes in English cultural and political life.

Peter Marshall works in the Department of History at the University of Warwick, UK and Geoffrey Scott is the Abbot of Douai Abbey in the UK and President of the Catholic Archives Society.

’An invaluable resource for historians of the English Catholic community...’ Times Literary Supplement ’...a valuable resource to anyone with an interest in the developing historiography of early modern English Catholicism. Each chapter provides an interesting and distinct analysis of a particular aspect of the family's interaction with wider society, whether it be at home or abroad. It is also refreshing to see greater attention paid to women (including women religious) than is often the case in volumes which focus on a particular family.’ Historians of Women Religious of Britain and Ireland ’... this scholarly book comprises a series of interlocking essays on a single family: the Throckmortons of Coughton Court, Warwickshire. As such it makes an important contribution to regional as well as Catholic history.’ Northern History ’There is a huge amount to admire in this book. The breadth and depth of scholarship in each of the chapters ensure that there will be something of interest and value here for students of all the periods covered.’ Recusant History ’There is still remarkably fruitful scholarship to be made by tilting our angle of vision over recusant England away from the old idiom of seclusion or isolation. In charting the conflicts, compromises and contingencies that shaped recusant life up to the point of that high Victorian sea-change, this book offers a masterly example of all that can be achieved.’ Archives 'This is a welcome publication because not only does it add to the growing body of research by early modern historians into the social, cultural and political interactions of English landed families at both local and national level, it also investigates these key relationships within a specifically Catholic gentry family.' History 'With the long-term historical approach and the extensive use of the Throckmorton family archive in the Warwickshire Record Office and the Shakespeare Birthplace Trust, the contributors have suc

Catholic Gentry in English Society: The Throckmortons of Coughton from Reformation to Emancipation