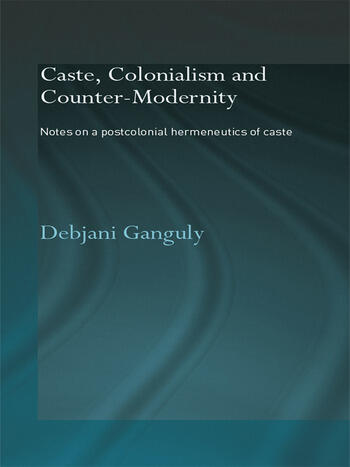 Caste, Colonialism and Counter-Modernity: Notes on a Postcolonial Hermeneutics of Caste

One prevalent socio-cultural structure that is peculiar to South Asia is caste, which is broadly understood in socio-anthropological terms as an institution of ranked, hereditary and occupational groups.

This book discusses the enigmatic persistence of caste in the lives of South Asians as they step into the twenty-first century. It investigates the limits of sociological and secular historical analysis of the caste system in South Asia and argues for ways of describing life-forms generated by caste on the subcontinent that supplement the accounts of caste in the social sciences. By focusing on the literary, oral, visual and spiritual practices of one particular group of ex-untouchables in western India called ‘Mahars’, the author suggests that one can understand caste not as an essence that is responsible for South Asia’s backwardness, but as a constellation of variegated practices that are in a constant state of flux and cannot be completely encapsulated within a narrative of nation-building, modernization and development.

Prologue  1. Modernity, Postcolonaiality and the New Humanities: Toward a non-holistic reading of caste  Part 1: Caste and Theoretical Horizons  2. The Dark Rock of Indian Tradition: Caste and orientalism  3. The Anomalous Insider: Caste and nationalism  4. An Intractable Dualism: Caste and Marxism  5. On the Other Side of Revenge: Caste and post-orientalism Part 2: Caste, Life-World, Narrative and the Aesthetic  6. Dalit Mythographies: Ambedkar as modernity's Interlocutor  7. Buddha, Bhakti and Superstition: A post-secular reading of dalit conversion  8. Of Urban Dystopias and New Gods: Readings from Marathi dalit literature  9. Chandra, Velutha, Ammu, Death: The aporia of the aesthetic  Epilogue

Debjani Ganguly is Director, Research Development, at the Centre for Cross-Cultural Research, Australian National University. She has published in the areas of postcolonial theory, caste and dalit studies, new literatures in English, and Indian literary criticism.

Caste, Colonialism and Counter-Modernity: Notes on a Postcolonial Hermeneutics of Caste