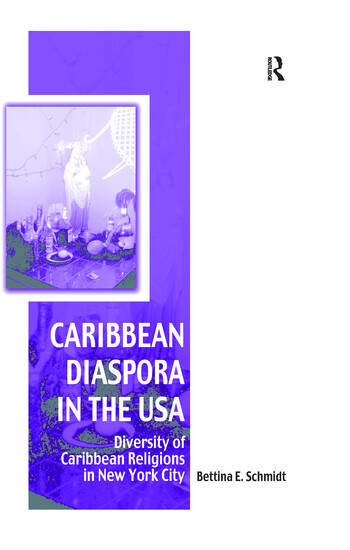 Caribbean Diaspora in the USA: Diversity of Caribbean Religions in New York City

Caribbean Diaspora in the USA presents a new cultural theory based on an exploration of Caribbean religious communities in New York City. The Caribbean culture of New York demonstrates a cultural dynamism which embraces Spanish speaking, English speaking and French speaking migrants. All cultures are full of breaks and contradictions as Latin American and Caribbean theorists have demonstrated in their ongoing debate. This book combines unique research by the author in Caribbean New York with the theoretical discourse of Latin American and Caribbean scholars. Focusing on Caribbean religious communities, including Cuban/Puerto Rican SanterÃ­a (Regla de Ocha), Haitian Vodou, Shango (Orisha Baptist) from Trinidad and Tobago, and Brazilian Pentecostal church, Schmidt's observations lead to the construction of a cultural concept that illustrates a culture in an ongoing state of change, with more than one form of expression depending on situation, time and context. Showing the creativity of religions and the way immigrants adapt to their new surroundings, this book fills a gap between Latin American and Caribbean Studies.

Dr Bettina Schmidt is a Lecturer in the Study of Religions and Director of Graduate Studies at the University of Bangor, Wales, UK.

'This is an important study for many reasons, including the way it attempts to break out of the traditional moulds used by researchers for understanding identity and culture. In its wide-ranging coverage of the religious culture of communities of Caribbean migrants, particularly in the United States, it presents this culture as in constant flux, multi-dimensional, and vastly varied. It also examines, without questioning their authenticity, the dynamics behind the formation of new religious communities created by these migrants, for whom religion both an important integrative, as well as boundary, maintenance system. In framing Caribbean religious culture and culture more generally in this way the author convincingly overcomes the theoretical and empirical inadequacies of essentialist understandings of Caribbean identity.' Peter B Clarke, Oxford University Discussions of ethnicity and religion have often been handicapped by the assumption that the plural segments making up US society have a relatively homogenous character. As Bettina Schmidt shows, when Caribbean and Latin American peoples come to the USA we must assume the opposite. The cultural landscape has shifted its moorings and new exciting, creolized mixtures have emerged. 'Vive le mélange'. Robin Cohen, Professorial Fellow, Queen Elizabeth House, University of Oxford Caribbean Diaspora in the USA explores complex cultural facets of Caribbean migration to New York within the dynamic networks of circular migrations between Caribbean islands, North America and Europe. The focus is not on the Caribbean community in New York per se but the multiple religious communities within it. Bettina Schmidt provides a sensitive and nuanced study of Caribbean cultural practices that blends personal experiences and observation with theoretical insights from anthropology and cultural theory. This illuminating and perceptive study provides fascinating detail of the inner world of Caribbean migrants, focusing on cultural tr

Caribbean Diaspora in the USA: Diversity of Caribbean Religions in New York City