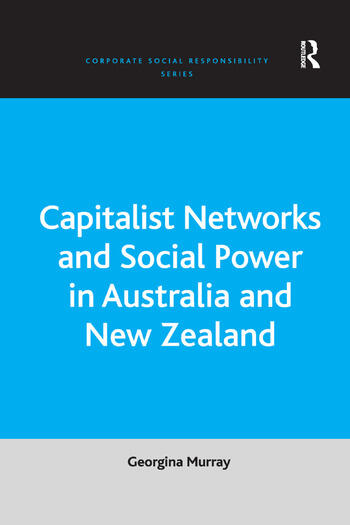 Capitalist Networks and Social Power in Australia and New Zealand

It is often asserted that the ruling elite in Western capitalist economies now consists of liberal intellectuals and their media sympathisers. By contrast this book looks at the real elite in Australian and New Zealand society and shows that there is still a ruling class based upon economic dominance. From an analysis of corporate and public records, interviews, and other primary and secondary data, it develops a picture of networks of power that are changing but are as real as any network in the past.

Dr Georgina Murray is a Senior Lecturer in the School of Arts, Media and Culture at Griffith University, Australia. She has taught political and social theory variously in Australia, New Zealand, China and Norway. She writes extensively and critically about New Zealand and Australian society and also has areas of research interest in feminist politics, legal professions and more recently women and mining communities.

Capitalist Networks and Social Power in Australia and New Zealand