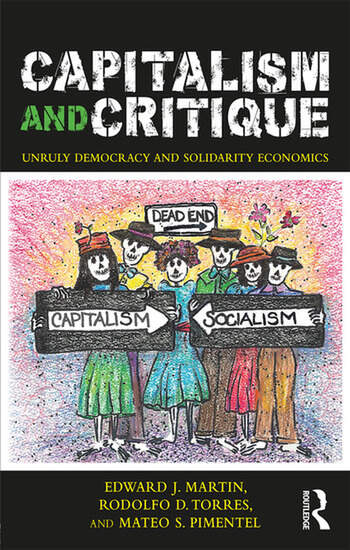 While there are signs of recovery from recent economic collapses, relatively few protective measures are in place in the United States to prevent future crises and widespread destruction of livelihoods around the globe.

This book, a follow-up and further development of Martin’s and Torres’ ideas in their acclaimed Savage State: Welfare Capitalism and Inequality, contains a synthesis and critique of economic theory with historical case studies and new discourse on American globalism and its failures to provide for the economic security of millions of people. Since the original publication over ten years ago, there has been a resurgence in radical political economy and critical theory. Instead of "demonizing" the market, Capitalism and Critique draws lessons from the new directions in social theory and seeks clear solutions for future modes of capitalism.

Introduction. Foundations of Direct Democracy and A New Solidarity Contract

1. On the Priority of Wage Labor

3. A Democratic Capitalism? Ricardian Socialism and Beyond

5. The Conundrum of Marx’s Theory of Value

6. A Moral Theory of Justice and A Democratic Economy

Edward J. Martin, Ph.D., teaches at the Graduate Center for Public Policy and Administration, California State University, Long Beach. He is co-author (with Rodolfo D. Torres) of Savage State: Welfare Capitalism and Inequality and his areas of research with the focus on political economy, welfare policy, and inequality. He is Editor-in-Chief of the International Journal of Economic Development and his publications have appeared in New Political Science, Contemporary Justice Review, International Journal of Public Administration, and Social Policy. He has also published in CounterPunch, Dissident Voice, and Axis of Logic. Professor Martin received his Ph.D. from Arizona State University.

is Professor of Urban Political Economy in the Department of Planning and Public Policy at the University of California, Irvine, where he also serves as director of the Latino Urban Theory Lab. He is receipt of the Adam Smith Foundation Fellowship at the University of Glasgow, where he also held a non-residential visiting professorship in the Department of Sociology. Torres has a long-standing interest in cultural political economy, metropolitan economic restructuring, Mexican American labor and class politics, radical urbanism, and Marxist traditions of state theory and class analysis. He is author or editor of more than fifteen books and 100 book chapters and articles. His most recent book is The Latino Question: Politics, Laboring Classes, and the Next Left published by Pluto Press.

is a graduate student in the Ph.D. program for Human and Social Dimensions of Science and Technology at Arizona State University’s School for the Future of Innovation in Society. Mateo is a USAID Research and Innovation Fellow, Global Development Research Scholar, and Assessment Coordinator for the NASA-sponsored Visions, Ventures, Escape Velocities project. He is a former Jesuit Volunteer.