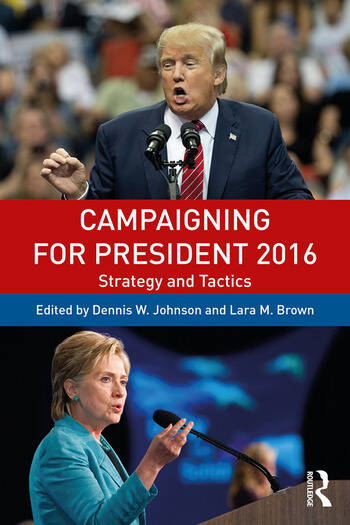 Campaigning for President 2016: Strategy and Tactics

Coming out of one of the most contentious elections in history, Dennis Johnson and Lara Brown have assembled an outstanding team of authors to examine one of the fiercest and most closely fought presidential elections of our time. Like the 2008 and 2012 editions of Campaigning for President, the 2016 edition combines the talents and insights of political scientists who specialize in campaigns and elections together with seasoned political professionals who have been involved in previous presidential campaigns. Campaigning for President is the only series on presidential campaigns that features both political scientists and professional consultants.

This book focuses on the most important questions of this most unusual presidential campaign. What was the appeal of Donald Trump? Has Twitter and social media become the dominant means of communicating? How did fake news, WikiLeaks, and the Russians factor in this election? What happened to the Obama coalition and why couldn’t Hillary Clinton capitalize on it? Hundreds of millions of Super PAC dollars were raised and spent, and much of that was wasted. What happened? Is the wild west of online media the new norm for presidential contests? These and many other questions are answered in the provocative essays by scholars and practitioners.

The volume also is packed with valuable appendixes: a timeline of the presidential race, biographical sketches of each candidate, a roster of political consultants, the primary and general election results, exit polls, and campaign spending.

Part One: The Primaries

Chapter 9. The Trump Effect on the Press, the Presidency, Rhetoric, and Democracy Major Garrett

Chapter 13. The Defining Fault Lines in One of the Darkest Campaigns in Political History Matthew Dallek

is Associate Professor and Interim Director of the George Washington University Graduate School of Political Management.

Praise for Campaigning for President 2016

Political scientists, journalists, and campaign strategists who want to make sense of the raucous contest between Donald Trump and Hillary Clinton should start with Campaigning for President 2016. The wide range of expert authors assembled in this book examine Trump’s election from all angles, and is an excellent read for the classroom or the war room.

Dennis Johnson and Lara Brown deliver a solid, timely book on what we think happened in the 2016 election. A great mix of academics and practitioners explains clearly what the elites did – and admit their confusion over what the electorate did. An excellent volume for our time.

Johnson and Brown have assembled an all-star team of scholars and practitioners to analyze the historic 2016 election. They provide important insights and analysis that help readers understand one of the greatest political upsets in American history. This book is a must for those who want to examine and understand what went on in the 2016 presidential election.

The 2016 campaign unfolded in a manner unlike any presidential election before it. Dennis Johnson and Lara Brown’s new volume expertly merges academic and practitioner perspectives to help readers understand the election cycle from open to close. Beyond looking at the Trump and Clinton campaigns, the writers help readers understand changes in campaign finance, the importance of the Bernie Sanders insurgency, the increasing role of social media, and the impact of fake news on future electoral politics. Analytically driven but immensely readable, Campaigning for President 2016 is a must-read for those wanting to understand how Donald Trump became president and how this election will shape those to come.

Dennis Johnson and Lara Brown’s new book is interesting and well-written. Most importantly, they take the Donald Trump phenomenon into account without only focusing on him. They give readers a good history of presidential elections in general, connecting them well to the 2016 election. It’s a keeper!

Campaigning for President 2016: Strategy and Tactics