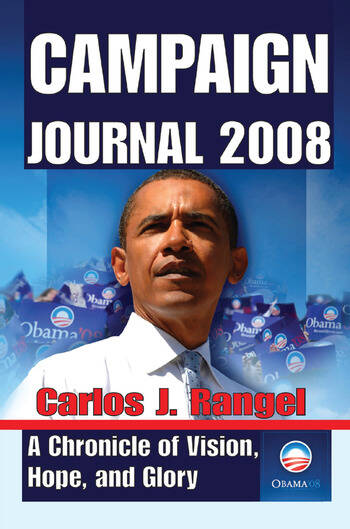 Campaign Journal 2008: A Chronicle of Vision, Hope, and Glory

In this distinctive and personal narrative of Barack Obama's 2008 campaign for the American presidency, Carlos Rangel chronicles the underlying currents of social change that led to this successful campaign. The results were a president with a clear majority of the votes cast; elected by a commanding majority of electoral votes; and who won states on both coasts, in the South, the Rust Belt, and the West. There were no recount battles, or intervention by the courts.

Rangel notes that the effective professional politician gathers coalitions around positions on the issues and uses these coalitions to formulate policies that bring these positions to fruition. The Obama Campaign coalesced expectations that he would be able to rapidly transform the way the country is led and lead Americans to a better future. These expectations were multiplied by an effective, well-run campaign. Certainly, Obama's capacity to inspire during the campaign led many to believe he could do the same as president.

Management of high expectations became one of President Obama's greatest challenges in the immediate period after the election. In transforming ideals of hope and change into reality, he faced political resistance from multiple fronts, an economy with structural flaws, and an internationally isolated United States. Rangel's unique background in Latin America enables him to make sharp observations about policies and campaign statements that may have influence in that region, including trade deals, drug wars and the populist rhetoric, and actions emanating from the region. This book is a solid start at analysis of the years ahead, as well as the year that was.

Acknowledgements
Introduction
1. The Democratic Primaries
So, She Won the Battle but... Did She Lose the War?
The Numbers Game
Open Letter to Senator Obama
Senator Barack Obama and the World Man
2. Clinton vs. Obama
After Pennsylvania: What are the Rules of the Game?
How Electable Will the Democratic Candidate Be?
3. A Pair of Primary Issues
Let's Talk About Unemployment
Our Health Care Market Dilemma
4. The Primaries are Over�Election Time is Here
What Now, Clinton?
How Electable is the Democratic Candidate? � Redux
Winning the Election Decisively
5. One Nation Indivisible
Roots of an Unapologetic Liberal
Not a Baby Boomer Anymore
The Terrorists Have Won... So Far
And Justice for All
6. The National Campaign (Finally) Begins
Coronation Night: A New Beginning
The End is Near
Governor Sarah Palin: The Choice
The Emperor's New Clothes
How to Lose an Election: A Fictional Glimpse into the Future
Earmarks, Lobbyists, and Special Interests that Go Bump in the Night
7. State of the Nation
A $700,000,000,000 Check
A Few Days Later: The Financial "Bailout"
Outsider Infl uences: Monroe is Long Gone
Mercenary Terrorism
8. The Debates
The Debate Performances
A Homeowner's Bailout
The Plumber's Taxes
Endorsements
9. An Outward Look
The Ugly American and the American Dream
The Latin America Trifecta: Brazil, Mexico and Colombia
Free Trade and Supranational Market Failures
10. The Elections
Election Week
What Now, Senator McCain?
Conclusions
In Transition
An Innovation Imperative
A More Perfect Government: A Delivering of Expectations
Appendixes
Bibliography
Index

Campaign Journal 2008: A Chronicle of Vision, Hope, and Glory