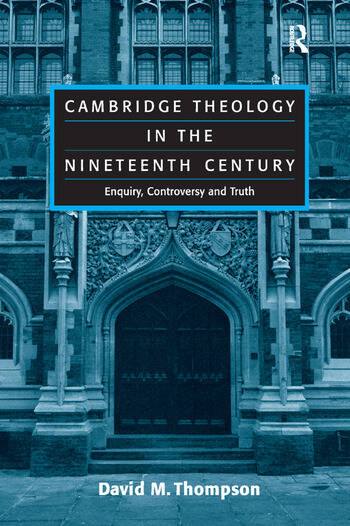 Cambridge Theology in the Nineteenth Century: Enquiry, Controversy and Truth

Many books have been written about nineteenth-century Oxford theology, but what was happening in Cambridge? This book provides the first continuous account of what might be called 'the Cambridge theological tradition', by discussing its leading figures from Richard Watson and William Paley, through Herbert Marsh and Julius Hare, to the trio of Lightfoot, Westcott and Hort. It also includes a chapter on nonconformists such as Robertson Smith, P.T. Forsyth and T.R. Glover. The analysis is organised around the defences that were offered for the credibility of Christianity in response to hostile and friendly critics. In this period the study of theology was not yet divided into its modern self-contained areas. A critical approach to scripture was taken for granted, and its implications for ecclesiology, the understanding of salvation and the social implications of the Gospel were teased out (in Hort's phrase) through enquiry and controversy as a way to discover truth. Cambridge both engaged with German theology and responded positively to the nineteenth-century 'crisis of faith'.

David M. Thompson is Professor of Modern Church History at the University of Cambridge, UK. He has been the Director of the Centre for Advanced Religious and Theological Studies since 1995 and Fellow of Fitzwilliam College Cambridge since 1965.

'For much of the twentieth century, especially in the thirty years after the end of the Second World War, Cambridge theology was no mere academic ghetto. David Thompson himself recalls the intellectual excitement of the early 1960s, when the questions raised by the Cambridge theologians - and their manner of raising them - were able to capture the minds and imaginations of a generation about to transform British society. As an historian, Thompson knows that such moments do not arrive from nowhere, and that to understand the story and the significance of Cambridge theology in the twentieth century, one has to go back to the nineteenth. As might be expected, the great trio of Westcott, Lightfoot, and Hort feature prominently in his groundbreaking study, but their work too is contextualized by a series of figures and debates reaching back to the eighteenth century. A story that weaves its way through so many shifting and interrelated currents in national, Church, and university life, as well as touching on private histories of faith and loss of faith is not easy to summarize, but Thompson brings the passion of his protagonists to life. Cambridge theology itself emerges as equally hard to summarize: 'broad', tolerant, questioning, difficult, attentive to the validity of science and to the demands of new historical criticism - certainly; but, at the same time, often all too 'establishment' (until the arrival in the late-nineteenth century of the nonconformists); and, then again, repeatedly courageous in breaking the mould of easy conformism. This is a book that every British theologian should ponder, and it is only to be hoped that someone will now go and do likewise for Oxford!' Revd Canon George Pattison, Lady Margaret Professor of Divinity, University of Oxford, UK David Thompson draws on his extensive knowledge of the nineteenth century to ask whether it is possible to identify a 'Cambridge tradition' in nineteenth-century theology. The pattern that emerges is

Cambridge Theology in the Nineteenth Century: Enquiry, Controversy and Truth