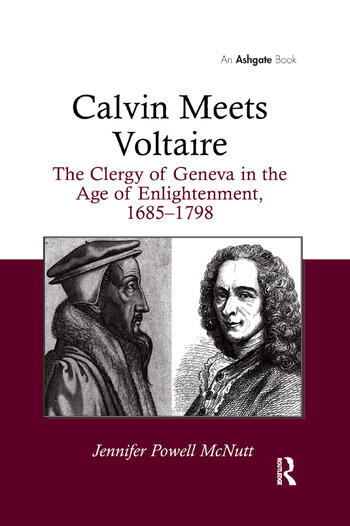 Calvin Meets Voltaire: The Clergy of Geneva in the Age of Enlightenment, 1685–1798

In 1754, Voltaire, one of the most famous and provocative writers of the period, moved to the city of Geneva. Little time passed before he instigated conflict with the clergy and city as he publicly maligned the memory of John Calvin, promoted the culture of the French theater, and incited political unrest within Genevan society. Conflict with the clergy reached a fever pitch in 1757 when Jean d’Alembert published the article ’Genève’ for the Encyclopédie. Much to the consternation of the clergy, his article both castigated Calvin and depicted his clerical legacy as Socinian. Since then, little has been resolved over the theological position of Calvin’s clerical legacy while much has been made of their declining significance in Genevan life during the Enlightenment era. Based upon a decade of research on the sources at Geneva’s Archives d'Ã‰tat and Bibliothèque de Genève, this book provides the first comprehensive monograph devoted to Geneva’s Enlightenment clergy. Examination of the social, political, theological, and cultural encounter of the Reformation with the Enlightenment in the figurative meeting of Calvin and Voltaire brings to light the life, work, and thought of Geneva’s eighteenth-century clergy. In addition to examination of the convergence with the philosophes, prosopographical research uncovers clerical demographics at work. Furthermore, the nature of clerical involvement in Genevan society and periods of political unrest are considered along with the discovery of a ’Reasonable Calvinism’ at work in the public preaching and liturgy of Genevan worship. This research moves Geneva’s narrative beyond a simplistic paradigm of ’decline’ and secularization, offers further evidence for a revisionist understanding of the Enlightenment’s engagement with religion, and locates Geneva’s clergy squarely in the newly emerging category of the ’Religious Enlightenment.’ Finally, the significance of French policy from the Revocat

Contents: Introduction: Geneva and the revisionist Enlightenment; The ’mother church’ of a new era; Clerical demographics and duties; Clerical Jeremiads and renunciations; Ministers and Philosophes; Reasonable Calvinism: from the pulpit to the pew; Clergy and the work of state-building; Conclusion: the French connection; Appendixes; Index.

Jennifer Powell McNutt is Associate Professor of Theology and History of Christianity at Wheaton College Graduate School in Wheaton, Illinois. Since being awarded a Ph.D. in history from the University of St. Andrews in 2008, she has continued to research the history of the clergy in the social, political, and cultural context as well as the transformation of the church in its institutional organization, thought, and practices from the Reformation period through the Enlightenment. In 2005, she was the recipient of the Sidney E. Mead Prize from the American Society of Church History. Currently, she is degree coordinator of the M.A. program in History of Christianity and in 2010 was ordained as a Minister of Word and Sacrament in the Presbyterian Church (USA).

'Jennifer Powell McNutt has delved into Geneva's rich archives to provide an excellent study of the clergy of this small republic, covering from the revocation of the Edict of Nantes to its annexation by France.' Sixteenth Century Journal 'This impressive, splendid study of clergy of Geneva in the era after Calvin is a detailed and persuasive indication that the common view that later Genevan clergy embraced unorthodox Socinianism is incorrect.' Church History 'This book captures important material and important debates in a setting too-often presumed to carry a single meaning in the grand narrative of pre-revolutionary Europe.' American Historical Review '[This is] a worthwhile collection and can certainly be recommended to those who wish to get a sense of current research.' English Historical Review

Calvin Meets Voltaire: The Clergy of Geneva in the Age of Enlightenment, 1685–1798