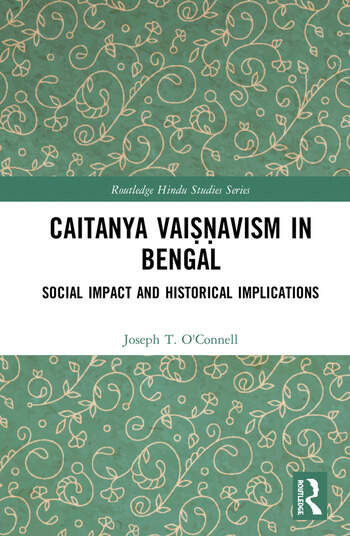 Within the broad Hindu religious tradition, there have been for millennia many subtraditions generically called Vaiṣṇava, who insist that the most appropriate mode of religious faith and experience is bhakti, or devotion, to the supreme personal deity, Viṣṇu. Caitanya Vaiṣṇavas are a community of Vaiṣṇava devotees who coalesced around Kṛṣṇa Caitanya (1486–1533), who taught devotion to the name and form of Kṛṣṇa, especially in conjunction with his divine consort Rādhā and who also came to be looked upon by many as Kṛṣṇa himself who had graciously chosen to be born in Bengal to exemplify the ideal mode of loving devotion (prema-bhakti).

This book focusses on the relationship between the ‘transcendent’ intentionality of religious faith of human beings and their ‘mundane’ socio-cultural ways of living, through a detailed study of the social implications of the Caitanya Vaiṣṇava devotional Hindu tradition in pre-colonial and colonial Bengal. Structured in two parts, the first analyzes the articulation of Kṛṣṇa-bhakti within the broad Hindu sector of Bengali society. The second section examines Hindu–Muslim relationships in Bengal from the particular vantage point of the Caitanya Vaiṣṇava tradition, and in which the subtle influence of Kṛṣṇa-bhakti, it is argued, may be detected. In both sections, the bulk of attention is given to the sixteenth and seventeenth centuries, when Bengal was under independent Sultanate or emergent Mughal rule and thus free of the impact of British and European colonial influence.

Arguing that the Caitanya Vaiṣṇava devotion contributed to the softening of the potentially alienating socio-cultural divisions of class, caste, sect and religio-political community in Bengal, this book will be of interest to academics in the field of Asian Religion and Hinduism, in particular devotional Hinduism, both premodern and modern, as well as to scholars and students of South Asian social history, Hindu-Muslim relations, and Bengali religious culture.

8. Vaiṣṇavas in Sultanate and Mughal Bengal

11. A Muslim Perception of Hindus