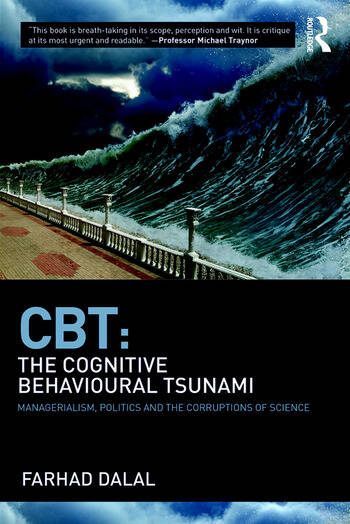 CBT: The Cognitive Behavioural Tsunami: Managerialism, Politics and the Corruptions of Science

Is CBT all it claims to be? The Cognitive Behavioural Tsunami: Managerialism, Politics, and the Corruptions of Science provides a powerful critique of CBT’s understanding of human suffering, as well as the apparent scientific basis underlying it. The book argues that CBT psychology has fetishized measurement to such a degree that it has come to believe that only the countable counts. It suggests that the so-called science of CBT is not just "bad science" but "corrupt science".

The rise of CBT has been fostered by neoliberalism and the phenomenon of New Public Management. The book not only critiques the science, psychology and philosophy of CBT, but also challenges the managerialist mentality and its hyper-rational understanding of "efficiency", both of which are commonplace in organizational life today. The book suggests that these are perverse forms of thought, which have been institutionalised by NICE and IAPT and used by them to generate narratives of CBT’s prowess. It claims that CBT is an exercise in symptom reduction which vastly exaggerates the degree to which symptoms are reduced, the durability of the improvement, as well as the numbers of people it helps.

Arguing that CBT is neither the cure nor the scientific treatment it claims to be, the book also serves as a broader cultural critique of the times we live in; a critique which draws on philosophy and politics, on economics and psychology, on sociology and history, and ultimately, on the idea of science itself. It will be of immense interest to psychotherapists, policymakers and those concerned about the excesses of managerialism.

Part I – The Tsunami.

Ch. 3 The Merchants of Happiness.

Ch. 10 IAPT: Managerialism and the Privatization of ‘Mental Health’.

Ch. 12 The Corruptions of Science.

Farhad Dalal has been in independent practice as a group analyst and psychotherapist for over thirty years. He also works with organizations. His previous books have questioned received wisdom in a range of territories including psychotherapy (Taking the Group Seriously), racism (Race, Colour and the Processes of Racialization) and equal opportunities (Thought Paralysis – The Virtues of Discrimination).

CBT: The Cognitive Behavioural Tsunami: Managerialism, Politics and the Corruptions of Science