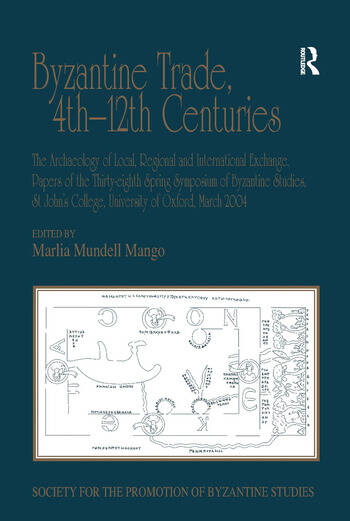 The 28 papers examine questions relating to the extent and nature of Byzantine trade from Late Antiquity into the Middle Ages. The Byzantine state was the only political entity of the Mediterranean to survive Antiquity and thus offers a theoretical standard against which to measure diachronic and regional changes in trading practices within the area and beyond. To complement previous extensive work on late antique long-distance trade within the Mediterranean (based on the grain supply, amphorae and fine ware circulation), the papers concentrate on local and international trade. The emphasis is on recently uncovered or studied archaeological evidence relating to key topics. These include local retail organisation within the city, some regional markets within the empire, the production and/or circulation patterns of particular goods (metalware, ivory and bone, glass, pottery), and objects of international trade, both exports such as wine and glass, imports such as materia medica, and the lack of importation of, for example, Sasanian pottery. In particular, new work relating to specific regions of Byzantium's international trade is highlighted: in Britain, the Levant, the Red Sea, the Black Sea and China. Papers of the 38th Spring Symposium of Byzantine Studies, held in 2004 at Oxford under the auspices of the Committee for Byzantine Studies.

’... this volume will remain for a long time to come the best assessment of present knowledge on early and mid-Byzantine trade. ... The symposiarch should be congratulated for impeccable editing, a rare feat when dealing with a multilingual bibliography and of course for such a comprehensive collection of papers.’ The Medieval Review