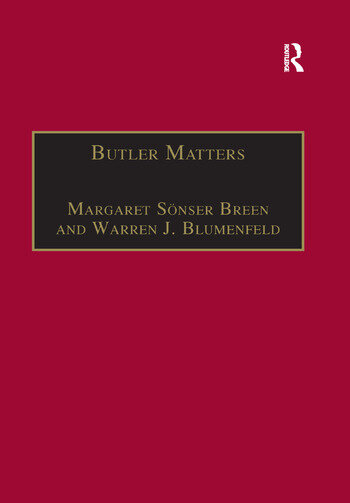 Since the 1990 publication of Gender Trouble, Judith Butler has had a profound influence on how we understand gender and sexuality, corporeal politics, and political action both within and outside the academy. This collection, which considers not only Gender Trouble but also Bodies That Matter, Excitable Speech, and The Psychic Life of Power, attests to the enormous impact Butler's work has had across disciplines. In analyzing Butler's theories, the contributors demonstrate their relevance to a wide range of topics and fields, including activism, archaeology, film, literature, pedagogy, and theory. Included is a two-part interview with Judith Butler herself, in which she responds to questions about queer theory, the relationship between her work and that of other gender theorists, and the political impact of her ideas. In addition to the editors, contributors include Edwina Barvosa-Carter, Robert Alan Brookey, Kirsten Campbell, Angela Failler, Belinda Johnston, Rosemary A. Joyce, Vicki Kirby, Diane Helene Miller, Mena Mitrano, Elizabeth M. Perry, Frederick S. Roden, and Natalie Wilson.

'Overall, the collection explores the rich and fruitful results of engagement with Butler's work... the collection is a fine companion to Butler's texts... I would recommend the interview and the more applied chapters as a particularly effective way to teach Butler to advanced undergraduate and graduate students... I would also recommend portions of the text [...] for the important questions they raise about the politics of Butler's uncomfortably foundational status in post-structuralist feminist and queer theory.' Association for Feminist Anthropology ’... a timely edited collection of essays assessing the critic's impact on feminist and queer studies... searching and provoking questions... clearly invaluable to researchers in this field... provoking some revealing answers... a valid contribution to the study of queer theory...’ The Year's Work in Critical and Cultural Theory