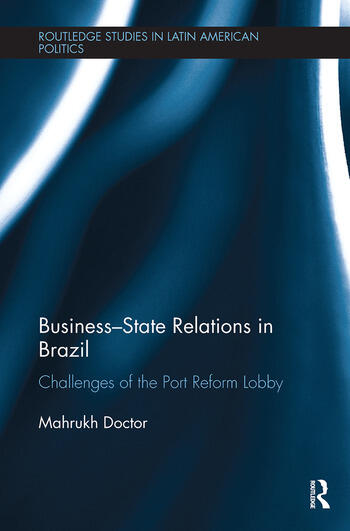 Business-State Relations in Brazil: Challenges of the Port Reform Lobby

In recent years, the spotlight of international attention on Brazil has often been in the area of logistics infrastructure—for example, on its capacity to deal with the high demand expected during the World Cup and the Olympics. However, neither competitiveness nor infrastructure concerns are new for Brazil. In the 1990s, Brazilian policy-makers adopted a series of liberalizing economic reforms that exposed the poor condition of logistics infrastructure and inadequate investment in Brazilian ports, roads, railways and airports. Over twenty years later, the implications of those reforms still colour Brazil’s prospects for development.

Mahrukh Doctor’s book evaluates the political economy of reform in Brazil and the difficulty of implementing institutional modernization in the context of opposition from vested interests originating in the state and civil society. It focuses specifically on the Port Modernization Law, which aimed to augment the country's competitiveness by creating efficient and low cost ports. Based on primary research carried out over a period of twenty years using original qualitative data, Doctor’s analysis focuses on the difficulties in implementing this law and how those difficulties are symptomatic of the wider issues associated with lack of sufficient investment in infrastructure in Brazil. Using the case of the business lobby for port reform, the book examines the evolving nature of business-state relations and the process of institutional change in Brazil. Doctor particularly examines the building of consensus for reform and policy formulation in the port sector and the challenges of reform implementation and institutional modernisation. The analysis provides extensive insights and lessons related to the prospects for boosting competitiveness of Brazilian ports. The book concludes by suggesting a likely path for the evolution of corporatist institutions as well as the provision of adequate logistics infrastructure to support business success in Brazil.

A unique work on the subject of port reform in Latin America that uses a hybrid analytical framework to understand reform in Brazil, this book is pertinent for a variety of subjects from Latin American Studies to political economy to economic-policy making.

Chapter 1: The Context: The Challenge of Boosting Competitiveness

Chapter 4: Full Steam Ahead - Spurs to Port Reform Legislation Chapter 5: A Perilous Journey - Institutions and Actors as Obstacles to Reform

Chapter 6: The Voyage So Far - Transport Logistics and Brazil Cost

Mahrukh Doctor is Senior Lecturer in Political Economy at the University of Hull and Adjunct Professorial Lecturer at the Johns Hopkins University SAIS-Europe. Her research interests include political economy of Brazil and regionalism in Latin America.

"This book joins an empirically rich case study of port reform in Brazil with a penetrating argument about how vested interests can block even such beneficial initiatives as infrastructure development. The book is a must-read for anyone interested in business-state relations and institutional change in emerging economies." - Kathryn Hochstetler, Professor of International Development, LSE

'"Brazil cost" is a longstanding challenge that has just been made much more acute by the depth of the country's 2014/16 politico-economic upheavals. Mahrukh Doctor's major new contribution goes well beyond prior debates, and provides indispensable guidance both to the past and to the future. It incorporates the crucial political and social aspects of an issue that has too often been tackled from a decontextualized economic perspective. So it brings out the institutional mediations that help explain why change and reform has proved at best sluggish and incremental. This is not just an authoritative new contribution to Brazilian studies, but also a much needed spur to wider reanalysis of the challenges confronting many "emerging" market policymakers." - Laurence Whitehead, Senior Research Fellow, Nuffield College, Oxford, UK

"Given the renewed emphasis in Brazil on investment in infrastructure, this book, an analysis of the Port Modernization Law of 1993, is very timely. It should appeal not just to specialists in infrastructure and ports, but to anyone interested in business-state relations and state formation in the Global South. Written by one of the most astute contemporary observers of Brazilian political economy, the book helps us to understand why the reform of state institutions in Brazil is so often slow and incremental." - Anthony Pereira, Director, Brazil Institute, King's College London

Business-State Relations in Brazil: Challenges of the Port Reform Lobby