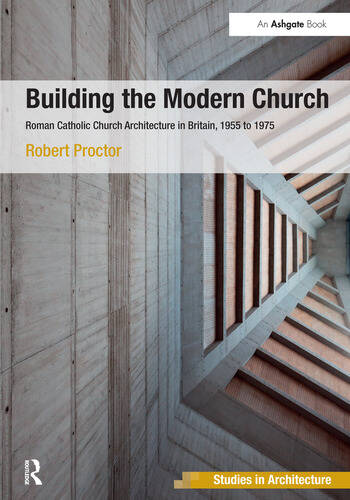 Fifty years after the Second Vatican Council, architectural historian Robert Proctor examines the transformations in British Roman Catholic church architecture that took place in the two decades surrounding this crucial event. Inspired by new thinking in theology and changing practices of worship, and by a growing acceptance of modern art and architecture, architects designed radical new forms of church building in a campaign of new buildings for new urban contexts. A focussed study of mid-twentieth century church architecture, Building the Modern Church considers how architects and clergy constructed the image and reality of the Church as an institution through its buildings. The author examines changing conceptions of tradition and modernity, and the development of a modern church architecture that drew from the ideas of the liturgical movement. The role of Catholic clergy as patrons of modern architecture and art and the changing attitudes of the Church and its architects to modernity are examined, explaining how different strands of post-war architecture were adopted in the field of ecclesiastical buildings. The church building’s social role in defining communities through rituals and symbols is also considered, together with the relationships between churches and modernist urban planning in new towns and suburbs. Case studies analysed in detail include significant buildings and architects that have remained little known until now. Based on meticulous historical research in primary sources, theoretically informed, fully referenced, and thoroughly illustrated, this book will be of interest to anyone concerned with the church architecture, art and theology of this period.

Dr Robert Proctor is Senior Lecturer on Architectural History & Theory at the University of Bath, UK.

’Robert Proctor’s book is a magisterial study of a vitally important topic: Roman Catholic church architecture in Britain during the period of upheaval, 1955-1975. Showing how architectural and liturgical developments became adopted in the specific context of Britain, Proctor gives fine-grained discussion of particular communities, and deeply impressive knowledge of the roles played by architects. ... This is a highly significant study; it will be the authoritative source on this subject.' Richard Kieckhefer, Northwestern University, USA 'Proctor’s own excellent photographs appear on almost every page, and his book concludes with plans and colour plates. It is likely to become the bible for all professionals in the field of church design for some time to come.' Timothy Brittain-Catlin,The Tablet 'Proctor’s investigations are underpinned by key questions regarding how communities understood and nurtured new ways of expressing Roman Catholic identity, and the book’s primary strength is its consistent and compelling interweaving of architectural and religious debates into a cohesive yet diverse and sometimes contradictory whole'. The Architectural Review 'RC churches identified with modernity as part of the post-war civic structure. For the firsdt time, churches were on prominent sites rather than tucked down back streets, and usually contained high quality artworks and stained glass. As EH’s ’Taking Stock’ assessment of RC Churches raises awareness of this previously neglected aspect of post-war church building, this book will be an essential underpinning to this story'. C20 Magazine 'The book is clearly written, avoiding professional jargon (whether ecclesiastical or architectural), and is well illustrated with black and white and (fewer) colour plates. There is also a useful series of plans. This is an indispensable guide for all those interested in a hitherto little-regarded but extraordinarily rich subject'. Context 'The real strength of this bo