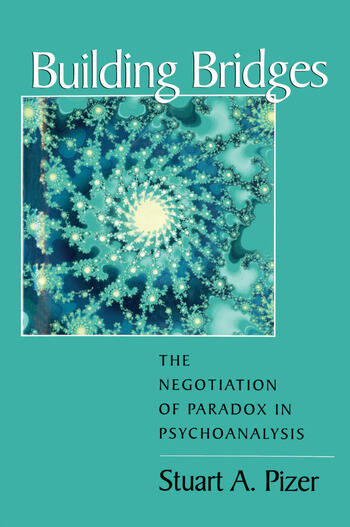 Building Bridges: The Negotiation of Paradox in Psychoanalysis

In Building Bridges, Stuart A. Pizer gives much-needed recognition to the central role of negotiation in the analytic relationship and in the therapeutic process. Building on a Winnicottian perspective that comprehends paradox as the condition for preserving an intrapsychic and relational "potential space," Pizer explores how the straddling of paradox requires an ongoing process of negotiation and demonstrates how such negotiation articulates the creative potential within the potential space of analysis.

Following careful review of Winnicott's perspective on paradox-via the pairings of privacy and interrelatedness, isolation and interdependence, ruthlessness and concern, and the notion of transitional phenomena-Pizer locates these elemental paradoxes within the negotiations of an analytic process. Together, he observes, analyst and patient negotiate the boundaries, potentials, limits, tonalities, resistances, and meanings that determine the course of their clinical dialogue. Elaborating on the theme of a multiply constituted, "distributed" self, Pizer presents a model for the tolerance of paradox as a developmental achievement related to ways in which caretakers function as "transitional mirrors." He then explores the impact of trauma and dissociation on the child's ability to negotiate paradox and clarifies how negotiation of paradox differs from negotiation of conflict.  Pizer also broadens the scope of his study by turning to negotiation theory and practices in the disciplines of law, diplomacy, and dispute resolution.

Enlivened by numerous clinical vignettes and a richly detailed chronicle of an analytic case from its earliest negotiations to termination, Building Bridges adds a significant dimension to theoretical understanding and clinical practice. It is altogether a psychoanalytic work of our time.

Building Bridges: The Negotiation of Paradox in Psychoanalysis