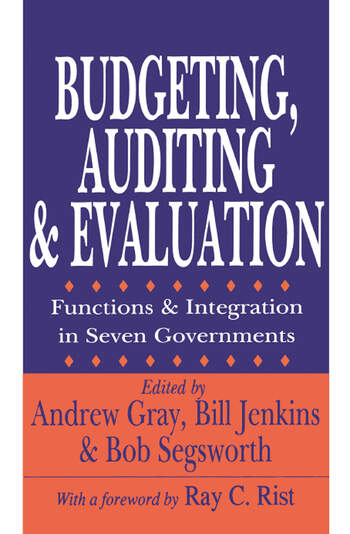 Budgeting, Auditing, and Evaluation: Functions and Integration in Seven Governments

The end of the twentieth century is shaping up as a period of volatile change and transition. As governments the world over work to sustain public policy and develop much needed policy initiatives, there is an increasing need for better budgetary management and sound evaluation of both past and prospective policies. Budgeting, Auditing, Evaluating presents in-depth, comparative examinations of budgetary processes in seven major Western governments.The contributors focus specifically on the important links between budgeting, auditing, and policy evaluation. These are examined as elements of an interactive process that plays a major role in government decision making. Although the three elements are institutionally and functionally distinct, auditing and evaluation generate information that has a measurable impact on government programs and their management. As each chapter demonstrates, national experiences show considerable variation in the development and linkage of budgeting, auditing, and evaluation. The authors identify both commonalities and divergences and make comparative statements of the consequences of these for the policy process.Contents: Andrew Gray, Bill Jenkins, and Bob Segsworth, "Perspectives on Budgeting, Auditing, and Evaluation: An Introduction," David Mathiasen, "The Separation of Powers and Political Choice" (United States), Andrew Gray and Bill Jenkins, "Separate Developments" (United Kingdom), Hans-Ulrich Derlien, 'Two-Track Processes" (Germany), Bob Segsworth, "Out of Sequence and Out of Synch" (Canada), Eduardo Zapico, "Many Reforms, Little Learning" (Spain), Rolf Sandahl, "Connected or Separated?" (Sweden), Pertti Ahonen and Esa Tammelin, "Muddling Through, Too" (Finland), Andrew Gray and Bill Jenkins, "Horses to the Water: Budgeting, Auditing, and Evaluation in Seven Governments."

Budgeting, Auditing, and Evaluation: Functions and Integration in Seven Governments