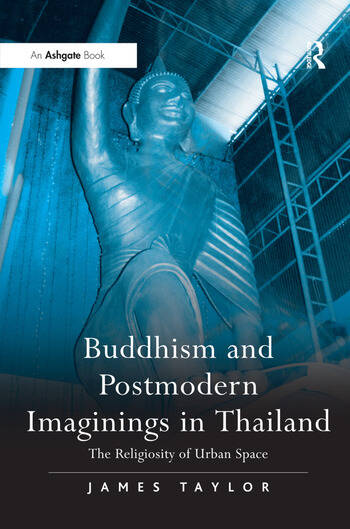 Buddhism and Postmodern Imaginings in Thailand: The Religiosity of Urban Space

This book presents a rethink on the significance of Thai Buddhism in an increasingly complex and changing post-modern urban context, especially following the financial crisis of 1997. Defining the cultural nature of Thai ’urbanity’; the implications for local/global flows, interactions and emergent social formations, James Taylor opens up new possibilities in understanding the specificities of everyday urban life as this relates to perceptions, conceptions and lived experiences of religiosity. Changes in the centre are also reverberating in the remaining forests and the monastic tradition of forest-dwelling which has sourced most of the nation’s modern saints. The text is based on ethnography taking into account the rich variety of everyday practices in a mélange of the religious. In Thailand, Buddhism is so intimately interconnected with national identity and social, economic and ethno-political concerns as to be inseparable. Taylor argues here that in recent years there has been a marked reformulation of important conventional cosmologies through new and challenging Buddhist ideas and practices. These influences and changes are as much located outside as inside the Buddhist temples/monasteries.

Dr J.L.Taylor, author of Forest Monks and the Nation-State (1993) is a Senior Lecturer in Anthropology at the School of Social Sciences, University of Adelaide, Australia. His research and work experiences are in critical theory and practice of planned culture change and the transformation of rural society, the development discourse and anthropology, ethno-ecology, and Thai Buddhism.

This book is a valuable contribution to the field of Thai Studies and the study of modern Buddhism; offering new perspectives on fascinating phenomena in Thai society. The six case studies in this book allow the reader to gain interesting insights into Thai Theravada in the context of globalization. Dr Martin Seeger, East Asian Studies, University of Leeds, UK ’This book presents a significant rethinking of the ever-changing landscapes of Thai metropolis Buddhism. ... [It] must be counted as a pioneering volume in the postmodern studies of Theravada Buddhism, as much as a notable contribution to anthropology/sociology of post-metropolis religion. As such, it will interest students and scholars across disciplines and area studies, such as cultural anthropology, religious studies, sociology of religion, and Southeast Asian studies.’ Anthropological Forum '[This] book contains a wealth of useful and stimulating information, and will appeal to anthropologists and religious studies specialists interested in Thailand and Southeast Asia, urban religion, religious commodification, and the Buddhist forest tradition. It will also be valuable for those generally interested in attempts to theorize outside of the conventional area studies milieu.' Journal of the Royal Anthropological Institute 'A reader interested in the issues of modernity and its influence on a contemporary Asian culture will find this timely book of interest. Others interested in issues of space (urban and village), nostalgia, politics, and the human body will also profit from this study.' Journal for the Study of Religion, Nature and Culture

Buddhism and Postmodern Imaginings in Thailand: The Religiosity of Urban Space