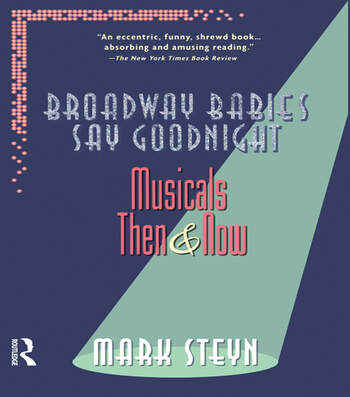 The glorious tradition of the Broadway musical from Irving Berlin to Jerome Kern and Rodgers and Hammerstein to Stephen Sondheim. And then . . . Cats and Les Miz. Mark Steyn's Broadway Babies Say Goodnight is a sharp-eyed view of the whole span of Broadway musical history, seven decades of brilliant achievements the best of which are among the finest works American artists have made. Show Boat, Oklahoma!, Carousel, Gypsy, and more. In an energetic blend of musical history, analysis, and backstage chat, Mark Steyn shows us the genius behind the 'simple' musical, and asks hard questions about the British invasion of Broadway and the future of the form. In this delicious book he gives us geniuses and monsters, hits and atomic bombs, and the wonderful stories that prove show business is a business which -- as the song goes --there's no business like.

Mark Steyn is a columnist for Britain's Daily Telegraph and Canada's National Post. He is theatre critic of The New Criterion, North American correspondent of The Spectator, and also contributes to The Wall Street Journal and The American Spectator. A Canadian citizen, he lives in New Hampshire and Québec.

"A columnist and critic offers an irreverent history of the Broadway musical, a diverse and lively art form that, judging from the flood of revivals these days, may be in its death throes. Broadway Babies is an eccentric, funny, shrewd and somewhat dismaying book." -- St. Paul Pioneer Press
"Wise but wicked in his analysis...Steyn leaves no turn unstoned...At last, a book of theater criticism with real teeth; it may rankle, but it never bores." -- Out Magazine
"[B]rilliantly opinionated British critic [Mark Steyn] knows the history of Broadway (and West End) musicals, and he makes us care that the current crop lacks conviction and craft. He excoriates meretricious gimmicks and he makes us yearn for shows that are authentic and believable because they are rooted in the human experience." -- Wall Street Journal
"Broadway Babies offers an unapologetically anecdotal and extremely personal account of musical theatre from The Black Crook (1866) to Rent (1996). With an emphasis on the last seventy years, Steyn charts the musical's highs, lows, and the banalities in-between, and he raises provocative questions about the future of the form. His discussion is peppered with observations from individuals associated with the most sublime - as well as the most ridiculous - shows ever produced, and he fearlessly takes on some of the sacred deities of the musical theatre. For even the most casual musical devotee, Broadway Babies will surely provoke, frustrate, and occasionally entertain." -- Broadside
"Steyn on Broadway is a very compelling autopsy report." -- Booklist 4/99
"...this delighful, irreverent romp through seven decades of American musical theater...a spontaneous mix of vibrating history, juicy gossip, plot and song analysis and pungent criticm..." -- Publishers Weekly
"Steyn is, alongside John Lahr of The New Yorker, the best working critic of my lifetime...This is the funniest, most vital, admirable, irritating, true and false account of the musical theatre ever published." -- Sheridan Morley, London Sunday Times
"Totally different and engrossing, this study is an important addition to the literature." -- Choice
"The critic Mark Steyn probably knows as much about musical theatre as anyone who has ever worked in that maddening field. In fact, I suspect he knows more... This is as unblinkered a history of musicals as has ever been written." -- Tim Rice, The Daily Telegraph