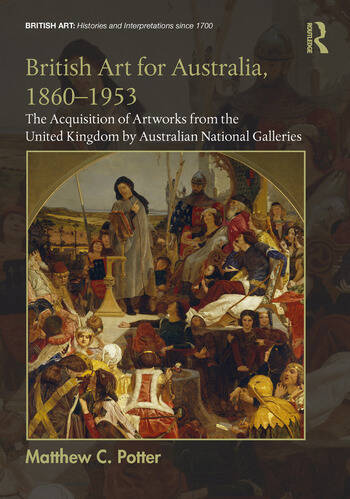 British Art for Australia, 1860-1953: The Acquisition of Artworks from the United Kingdom by Australian National Galleries

Traditional postcolonial scholarship on art and imperialism emphasises tensions between colonising cores and subjugated peripheries. The ties between London and British white settler colonies have been comparatively neglected. Artworks not only reveal the controlling intentions of imperialist artists in their creation but also the uses to which they were put by others in their afterlives. In many cases they were used to fuel contests over cultural identity which expose a mixture of rifts and consensuses within the British ranks which were frequently assumed to be homogeneous. British Art for Australia, 1860–1953: The Acquisition of Artworks from the United Kingdom by Australian National Galleries represents the first systematic and comparative study of collecting British art in Australia between 1860 and 1953 using the archives of the Australian national galleries and other key Australian and UK institutions. Multiple audiences in the disciplines of art history, cultural history, and museology are addressed by analysing how Australians used British art to carve a distinct identity, which artworks were desirable, economically attainable, and why, and how the acquisition of British art fits into a broader cultural context of the British world.

It considers the often competing roles of the British Old Masters (e.g. Romney and Constable), Victorian (e.g. Madox Brown and Millais), and modern artists (e.g. Nash and Spencer) alongside political and economic factors, including the developing global art market, imperial commerce, Australian Federation, the First World War, and the coming of age of the Commonwealth.

Chapter Two: ‘Work that would meet the taste of the Colonists’: British art for Antipodean Britons

Chapter Three: ‘The civilization of the people’: Australian national galleries and civic humanism

Chapter Five: ‘The best equipped agent, with as free a hand’: advisors and selectors of British art for Australia

Chapter Six: ‘A Sop to Cerberus’: Collecting the British Old Masters in Australia

Chapter Seven: ‘One of the many Colonial Delusions’: Australian national galleries and British Landscape Painting

Chapter Eight: ‘No highly desirable Pre-Raphaelite picture should be spared from home’: the antipodean pursuit of a British acme

Chapter Nine: ‘The gap that is steadily widening’: the acquisition of ‘insular’ British Modernism by Australian national galleries, 1900-1953

Matthew C. Potter is an associate professor and reader in art and design history at Northumbria University, UK

"British Art for Australia makes a valuable contribution to the histories of Australian art collecting and Anglo-Australian cultural identity. In addition to enriching an understanding of Australian galleries, it will also provide a useful point of comparison for studies investigating the collections development of institutions in other former British settler societies, such as Canada, New Zealand, and South Africa. Potter’s study is well supported by extensive archival research."

"The book provides a nuanced reading that contributes to our understanding of the complexities of cultural exchange that underpinned the development of the British collections of Australia’s state galleries."

British Art for Australia, 1860-1953: The Acquisition of Artworks from the United Kingdom by Australian National Galleries