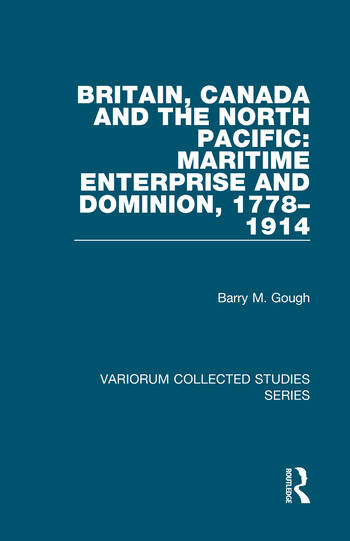 Britain, Canada and the North Pacific: Maritime Enterprise and Dominion, 1778–1914

From the time of Cook, the British and their Canadian successors were drawn to the Northwest coast of North America by possibilities of trade in sea otter and the wish to find a 'northwest passage'. The studies collected here trace how, under the influences of the Royal Navy and British statecraft, the British came to dominate the area, with expeditions sent from London, Bombay and Macau, and the Canadian quest from overland. The North West Company came to control the trade of the Columbia River, despite American opposition, and British sloop diplomacy helped overcome Russian and Spanish resistance to British aspirations. Elsewhere in the Americas, the British promoted trans-Pacific trade with China, harvested British Columbia forests, conveyed specie from western Mexico, and established the South America naval station. The flag followed trade and vice versa; empire was both formal (at Vancouver Island) and informal (as in California or Mexico). This book features individuals such as James Cook, William Bolts, Peter Pond, and Sir Alexander Mackenzie. It is also an account of the pressure that corporations placed on the British state in shaping the emerging world of trade and colonization in that distant ocean and its shores, and of the importance of sea-power in the creation of modern Canada.

Contents: Introduction; James Cook and British Enterprise in the North Pacific: The Northwest coast in late 18th century British expansion; New empires of trade and territory in the time of Malaspina; Pacific exploration in the 1780s and 1790s; James Cook and the origins of the maritime fur trade; India-based expeditions of trade and discovery in the North Pacific in the late 18th century; William Bolts and the Austrian attempt to establish an eastern empire; The North West Company's 'adventure to China'; Peter Pond and Athabasca: fur trade, discovery, and empire; British-Russian rivalry and the search for the Northwest Passage in the early 19th century; The Royal Navy and the Oregon crisis, 1844-46; Forests and sea power: a Vancouver Island economy, 1778-1875; Possessing Meares Island. Pax Britannica: South America, Canada, And The Pacific: Sea power and South America: the 'Brazils' or South American station of the Royal Navy, 1808-37; Specie conveyance from the west coast of Mexico in British warships, c.1820-70: an aspect of the Pax Britannica; The records of the Royal Navy's Pacific station; Canada and the North Pacific, 1871-1914: problems of a lion's cub in an open den; The Royal Navy and Canadian dominion; Sea power and British North America: the maritime foundations of the Canadian state; Pax Britannica: peace, force and world power. Index.

Britain, Canada and the North Pacific: Maritime Enterprise and Dominion, 1778–1914