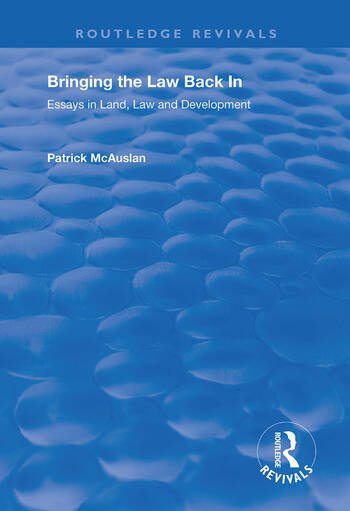 Bringing the Law Back In: Essays in Land, Law and Development

This title was first published in 2003. Bringing together the two fields of land reform and law, this volume examines the role the law and lawyers can, should, and do play in developing countries in the evolution of land policies, in land tenure reform, and in the reform of land use and urban planning. Providing both a theoretical and practical perspective it discusses the role of law in both urban land reform, concentrating on reforms in land use and town and country planning law and general national land reform, looking at specific case studies and at more general themes. It provides a coherent set of ideas and philosophies about land reform through the medium of law, which have been developed through reflection and action over a considerable period of time.

Opinions: Land policy: a framework for analysis and action; The urban land question; Law and urban development: impediments to reform; Only the name of the country changes: the diaspora of ’European’ land law in Commonwealth Africa; The best laid schemes o’ mice an' men: the diaspora of town and country planning law in Africa and Asia; Bringing the law back in: urban law in Africa and the habitat agenda. Operations: The role of law in urban planning and land development; Planning law in the Commonwealth Caribbean: the challenge of reform; A legal framework for planning and development control: alternative methods for the Madras Metropolitan area; Land tenure, the urban poor and the law in Bangladesh: implementing the habitat agenda; Making law work: restructuring land relations in Africa; As good as it gets: politics and markets in the making of Uganda’s Land Act, 1998; Men behaving badly: a narrative of land reform; Land in the city: the role of law in reforming urban land markets.

Patrick McAuslan is Professor of Law at Birkbeck College, London, UK and Emeritus Professor of Urban Management, UCL. He was awarded his MBE for services to African land use and environment in the Birthday honours in 2001.

’Patrick McAuslan is one of - if not the - leading analyst and practitioner in the complex issue of land law. This book reviews with his customary authority and clarity the evolution of land law in developing countries and identifies policy options to ensure that the law conforms to the needs of the poor minority, not just the affluent minority.’ Geoffrey Payne, Geoffrey Payne Associates, London ’Drawing from his extensive professional experience in several countries over the years, Professor McAuslan's seminal work on urban law, planning and policy has long inspired academics and policy-makers internationally. His new book - thought-provoking and timely - will certainly provide renewed guidance to jurists and urban planners challenged by the difficult task of improving living conditions in cities.’ Dr. Edesio Fernandes, Co-ordinator of IRGLUS-International Research Group on Law and Urban Space, Lecturer at the Development Planning Unit of University College London, UK '...useful to those interested or involved in the land problems of developing countries and the laws that can help to solve them.' Geomatica '...a much-needed breath of fresh air. It convincingly broaches most of the important issues associated with land and law in the context of development, without harangues or polemics. This is a work of accomplished scholarship.' The Windsor Yearbook of Access to Justice 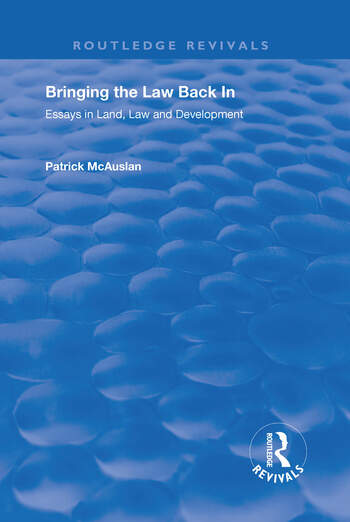 Bringing the Law Back In: Essays in Land, Law and Development