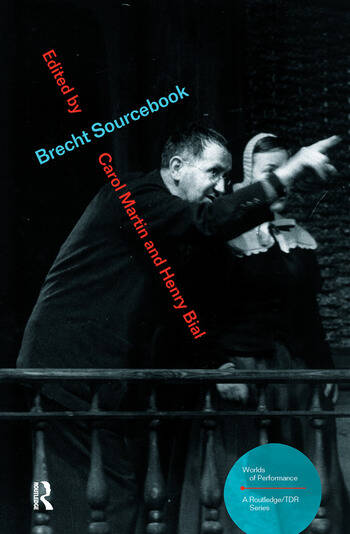 Bertolt Brecht is one of the most prolific and influential writer-directors of the twentieth century. This fascinating anthology brings together in one volume many of the most important articles written about Brecht between 1957 and 1997. The collection explores a wide range of viewpoints about Brecht's theatre theories and practice, as well as including three plays not otherwise available in English: The Beggar or The Dead Dog, Baden Lehrstuck and The Seven Deadly Sins of the Lower Middle Class.
Editors Martin and Bial have brought together a unique compendium which covers all the key areas including:
* the development of Brecht's aesthetic theories
* the relationship of Epic theatre to orthodox dramatic theatre
* Brecht's collaboration with Kurt Weill, Paul Dessau and Max Frisch
* Brecht's influence on a variety of cultures and contexts including England, Italy , Moscow and Japan.
Together these essays are an ideal companion to Brecht's plays, and provide an invaluable reconsideration of Brecht's work.
Contributors include: Werner Hecht, Mordecai Gorelik, Eric Bentley, Jean-Paul Sartre, Kurt Weill, Ernst Bloch, Darko Suvin, Carl Weber, Paul Dessau, Denis Calandra, W. Stuart McDowell, Ernst Schmacher, Hans-Joachim Bunge, Martin Esslin, Artuto Lazzari, Tadashi Uchino, Diana Taylor, Elin Diamond, and Lee Baxandall.

'There is no doubt that this book will prove a valuable companion to Brecht's plays and affords an important re-evaluation of his work. It is no 'coffee table book', but a serious anthology for those anxious to probe the minds of some of the great thinkers amongst Brecht's contemporaries.' - Amateur Stage