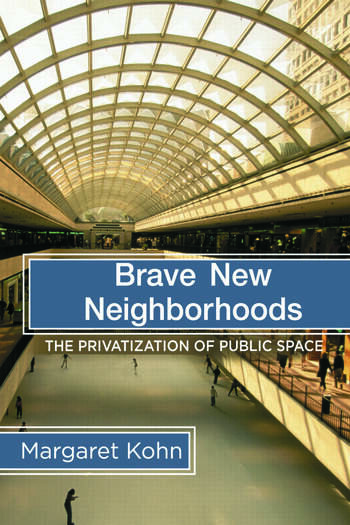 Fighting for First Amendment rights is as popular a pastime as ever, but just because you can get on your soapbox doesn't mean anyone will be there to listen. Town squares have emptied out as shoppers decamp for the megamalls; gated communities keep pesky signature gathering activists away; even most internet chatrooms are run by the major media companies. Brave New Neighborhood sconsiders what can be done to protect and revitalize our public spaces.

Margaret Kohn is Assistant Professor of Political Science at the University of Florida. She is the author of Radical Spaces, and she has published articles in Dissent, Polity, Political Theory, Constellations, and IPSR.

"Kohn is adept at bringing theory to politics where power works most powerfully and most discreetly: in the home, on the street, in the mall, in the post office. Her study of politics and public space is a dramatic contribution by an emerging public intellectual: a powerful intervention in political theory, and an influence on political practice." -- Anne Norton, Professor of Political Science, University of Pennsylvania
"Written with a crisp prose and clarity of purpose, the book effectively demonstrates how the privatization of public space enables citizens to mobilize democratic ideals while shielding themselves from contact with those whom they regard as strangers, outsiders, and aliens. Kohn casts her sharp and investigative eye toward many spaces such as malls, condos, plazas, parks, neighborhoods, and streets where she documents the shrinking of public life and struggles that resist it. The book will be of interest to anyone who is concerned about how we are destroying public life by creating more and more privatized spaces."
." -- Engin Isin, author of Being Political: Genealogies of Citizenship and editor of Democracy, Citizenship and the Global City
Cities/Public Space 26:7/347
"A well-argued thesis that public space provides an essential public good in a democratic society, the commons deserve protection, and ubiqutious market forces must be resisted." -- Future Survey
"A very fine book...it raises profoundly important issues about the accessibility and availability of public space outside of corporate power and market relationships." -- Jamin Raskin
"In writing that beautifully blends historical color, legal nuance, and scholarly passion, Margaret Kohn argues persuasively that public space in the United States is rapidly becoming an endangered species, threatening our core values of democracy, dissent, toleration, and equality. Her arguments for preserving and expanding places where all of us must encounter challenging new people and ideas should be required reading for every judge, legislator, and zoning-board member in America."
-- Michael H. Shuman, author, Going Local: Creating Self-Reliant Communities In a Global Age