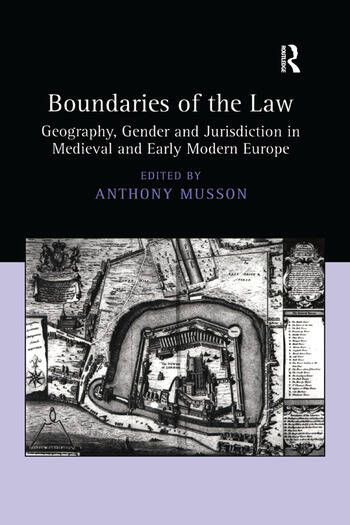 Boundaries of the Law: Geography, Gender and Jurisdiction in Medieval and Early Modern Europe

Exploring the boundaries of the law as they existed in medieval and early modern times and as they have been perceived by historians, this volume offers a wide ranging insight into a key aspect of European society. Alongside, and inexorably linked with, the ecclesiastical establishment, the law was one of the main social bonds that shaped and directed the interactions of day-to-day life. Posing fascinating conceptual and methodological questions that challenge existing perceptions of the parameters of the law, the essays in this book look especially at the gender divide and conflicts of jurisdiction within an historical context. In addition to seeking to understand the discrete categories into which types of law and legal rules are sometimes placed, consideration is given to the traversing of boundaries, to the overlaps between jurisdictions, and between custom(s) and law(s). In so doing it shows how law has been artificially compartmentalised by historians and lawyers alike, and how existing perceptions have been conditioned by particular approaches to the sources. It also reveals in certain case studies how the sources themselves (and attitudes towards them) have determined the limitations of historical enterprise. Adopting an interdisciplinary approach to the subject, the contributors demonstrate the fruitfulness of examining the interfaces of apparently diverse disciplines. Making fresh connections across subject areas, they examine, for example, the role of geography in determining litigation strategies, how the law interacted with social and theological issues and how fact and fiction could intertwine to promote notions of justice and public order. The main focus of the volume is upon England, but includes useful comparative papers concerning France, Flanders and Sweden. The contributors are a mixture of young and established scholars from Europe and North America offering a new and revisionist perspective on the operation of law in the medieval and early modern periods.

Dr Anthony Musson is from the School of Law at the University of Exeter, UK.

Boundaries of the Law: Geography, Gender and Jurisdiction in Medieval and Early Modern Europe