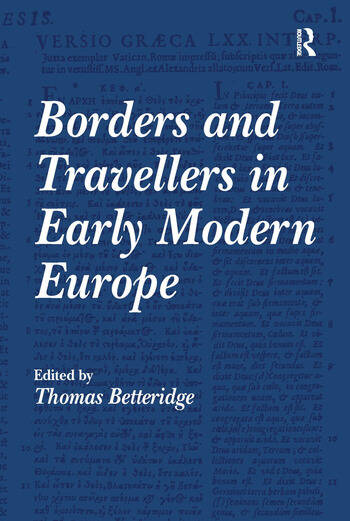 Early modern Europe was obsessed with borders and travel. It found, imagined and manufactured new borders for its travellers to cross. It celebrated and feared borders as places or states where meanings were charged and changed. In early modern Europe crossing a border could take many forms; sailing to the Americas, visiting a hospital or taking a trip through London's sewage system. Borders were places that people lived on, through and against. Some were temporary, like illness, while others claimed to be absolute, like that between the civilized world and the savage, but, as the chapters in this volume show, to cross any of them was an exciting, anxious and often a potentially dangerous act. Providing a trans-European interdisciplinary approach, the collection focuses on three particular aspects of travel and borders: change, status and function. To travel was to change, not only humans but texts, words, goods and money were all in motion at this time, having a profound influence on cultures, societies and individuals within Europe and beyond. Likewise, status was not a fixed commodity and the meaning and appearance of borders varied and could simultaneously be regarded as hostile and welcoming, restrictive and opportunistic, according to one's personal viewpoint. The volume also emphasizes the fact that borders always serve multiple functions, empowering and oppressing, protecting and threatening in equal measure. By using these three concepts as measures by which to explore a variety of subjects, Borders and Travellers in Early Modern Europe provides a fascinating new perspective from which to re-assess the way in which early modern Europeans viewed themselves, their neighbours and the wider world with which they were increasingly interacting.

’The collection is a worthy addition to Ashgate's catalog, presenting important and thoughtful scholarship on early modern European crosscultural encounters and deploying the border in useful and sometimes innovative ways... It will be especially useful to those who continue to work with early modern travel and travel writing as well as those interested more generally in early modern cultural studies and questions of difference.’ Renaissance Quarterly ’[a] rich and challenging collection...’ Review of English Studies