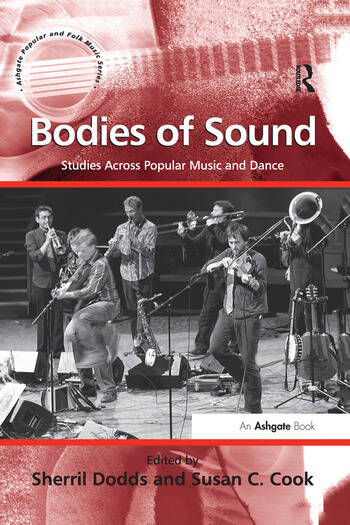 Bodies of Sound: Studies Across Popular Music and Dance

From the ragtime one-step of the early twentieth century to the contemporary practices of youth club cultures, popular dance and music are inextricably linked. This collection reveals the intimate connections between the corporeal and the sonic in the creation, transmission and reception of popular dance and music, which is imagined here as ’bodies of sound’. The volume provokes a wide-ranging, interdisciplinary conversation that includes scholarship from Asia, Europe and the United States, which explores topics from the nineteenth century through to the present day and engages with practices at local, national and transnational levels. In Part I: Constructing the Popular, the authors explore how categories of popular music and dance are constructed and de-stabilized, and their proclivity to appropriate and re-imagine cultural forms and meanings. In Part II: Authenticity, Revival and Reinvention, the authors examine how popular forms produce and manipulate identities and meanings through their attraction to and departure from cultural traditions. In Part III: (Re)Framing Value, the authors interrogate how values are inscribed, silenced, rearticulated and capitalized through popular music and dance. And in Part IV: Politics of the Popular, the authors read the popular as a site of political negotiation and transformation.

Dr Sherril Dodds is Chair and Professor of Dance at Temple University, USA. Her scholarship centres on popular, social and screen dance practices and she has authored two books: Dance on Screen: Genres and Media from Hollywood to Experimental Art (2001) and Dancing on the Canon: Embodiments of Value in Popular Dance (2011). She is a founding member of the UK research group PoP Moves and sits on the Board of Directors and Editorial Board of the Congress on Research in Dance and the Editorial Boards of the Korean Society of Dance and Society of Dance History Scholars. Susan C. Cook is Professor of Music and the academic associate dean for the Arts and Humanities in the Graduate School at the University of Wisconsin-Madison. Her teaching and research focus on contemporary and American musics of all kinds and demonstrate her abiding interest in dance history, cultural criticism and interdisciplinary scholarship. She is the author of Opera for a New Republic, co-editor of Cecilia Reclaimed and contributed essays to Audible Traces, The Cambridge History of Twentieth-Century Music, the Garland Encyclopedia of World Music, Teaching Music History, Contemporary Theatre Review, Woman and Music and The Arts of the Prima Donna.

’This anthology explores a neglected area of popular music studies - popular dance practices - and does so from a fresh perspective. The volume introduces some of the key popular dance scholars, and their latest thinking, to the field of popular music studies. From pioneering dance scholars such as Theresa Buckland to up-and-coming dance theorists such as Clare Parfitt-Brown, the array of perspectives addressed is always reliably grounded in rigorous research. ... The impact of this collection of essays is in the originality of its topics and in its engagement with popular dance practices. The volume’s value is in its empirical rigour, where theorising tends to emerge from the practices themselves. Most notably, these projects provide a model for seeing what hasn’t been noticed before. It’s commendable that dance scholars are leading the way here at the intersections of popular music and cultural studies’. Popular Music

Bodies of Sound: Studies Across Popular Music and Dance