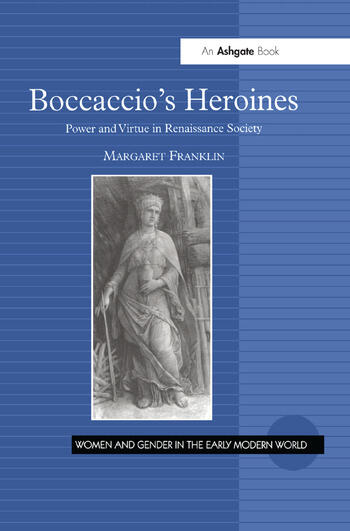 In contrast to earlier scholars who have seen Boccaccio's Famous Women as incoherent and fractured, Franklin argues that the text offers a remarkably consistent, coherent and comprehensible treatise concerning the appropriate functioning of women in society. In this cross disciplinary study of a seminal work of literature and its broader cultural impact on Renaissance society, Franklin shows that, through both literature and the visual arts, Famous Women was used to promote social ideologies in both Renaissance Tuscany and the dynastic courts of northern Italy. Speaking equally to scholars in medieval and early modern literature, history, and art history, Franklin brings needed clarification to the text by demonstrating that the moral criteria Boccaccio used to judge the lives of legendary women - heroines and miscreants alike - were employed consistently to tackle the challenge that politically powerful women represented for the prevailing social order. Further, the author brings to light the significant influence of Boccaccio's text on the representation of classical heroines in Renaissance art. By examining several paintings created in the republics and principalities of Renaissance Italy, Franklin demonstrates that Famous Women was employed as a conceptual guide by patrons and artists to draw the teeth from the challenge of unconventionally powerful women by co-opting their stories into the service of contemporary Italian standards and mores.

'Franklin follows her discussion of Boccaccio's work with a historical analysis of both texts and images influenced by it during the fifteenth and early sixteenth centuries, showing how different circumstances and audiences led to different interpretations of these female heroines. Richly researched and clearly written, and accompanied by illustrations of the images discussed, Boccaccio's Heroines offers a fine contribution to Boccaccio studies and women's studies for both students and scholars.' Professor Janet L. Smarr, UC San Diego, USA ’Boccaccio's Heroines is thoroughly researched, clearly presented, and accompanied by eighteen black-and-white illustrations that offer significant visual evidence for the discussion. It is a welcome contribution to Boccaccio studies and to the study of Renaissance art, and will be useful to both students and scholars in a variety of disciplines.’ Sixteenth Century Journal ’One book that stands out is Margaret Franklin's Boccaccio's Heroines. This volume, which includes Italian literature, art history, gender studies, cultural history, is a solid contribution to Boccaccio studies...Franklin's book will benefit students of Boccaccio's De mulieribus claris and can also serve as a tool for scholars of early modern Italian culture, especially those interested in gender.’ H-Net Review ’This is a concise and well-presented volume in which the principal thesis is clearly articulated and developed while fulfilling the dual function of rereading a classic text and providing a partial reception study. ... this text will undoubtedly, and rightly, find its way onto many an undergraduate reading list.’ Modern Language Review ’... Boccaccio's Heroines [is] a very useful starting-point for anybody new to the study of women in Italy.’ Heliotropia