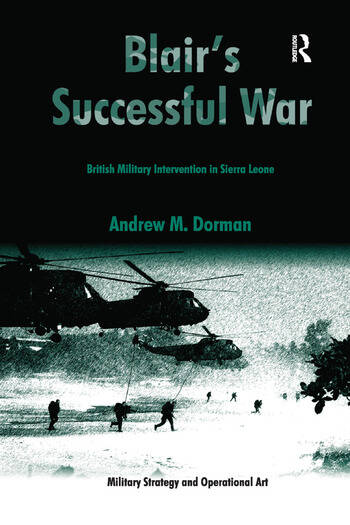 Andrew Dorman introduces Sierra Leone as Blair's second great military adventure after Kosovo and the first he undertook on his own. It is tied to Blair's 1999 Chicago speech on the 'Doctrine of the International Community', his move towards humanitarianism and the impact of the Kosovo experience. The book links this move with the rise of cosmopolitan militaries and the increasing involvement of Western forces in humanitarian operations and their impact on the international system. Furthermore, it places it within the context of defence transformation and the emerging Western expeditionary capabilities, in particular the European Union's new battle group concept and developments in concepts such as Network Centric Warfare and Networked Enabled Capability. Examining the whole campaign and considering the impact on the Blair Government, this book will prove to be a key reader on the topic.

Contents: Introduction; Blair and the use of military force; Background history: from the creation of Sierra Leone to the end of civil war; Lomé peace agreement and UNAMSIL - the UN peacekeeping mission; Evacuation, May 2000; Saving UNAMSIL and confronting the RUF; Operation Barras - the hostage rescue; The defeat of the RUF; Impact of the operation; Select bibliography; Index.

'British intervention in Sierra Leone represented an important milestone in shaping the future of Britain’s foreign and security policy and Andrew Dorman’s book provides the first real in-depth study of this event and its longer term consequences. This is an impressive tome that demonstrates how important the humanitarian agenda became for the Blair Government. Equally important, is the rich detail he provides concerning the planning and conduct of the actual military operation, and the problems that arose between the military and their civilian masters. This is a remarkably good study of a military campaign and the wider politics that surrounded it.' Warrren Chin, King's College London, UK 'Blair's Successful War is a critical and compelling account of Britain’s armed intervention in Sierra Leone. This expert assessment is essential reading for those interested in the political, diplomatic and military dimensions of the conflict, and for those examining the doctrine and practice of armed intervention during the Blair government.' Paul Cornish, Chatham House, UK 'During his period in office, Tony Blair deployed British forces on more operations than any other prime minister since the Second World War. The British intervention into Sierra Leone in 2000 was arguably his most successful use of military force. In his insightful book, Dr Andrew Dorman dissects the political and military dynamics behind the Sierra Leone operation, drawing on unprecedented access to the key players in the unfolding operation. The mission to Sierra Leone was important in itself but Dr Dorman shows how, despite its success, the mission anticipated many of the institutional failings which would undermine British efforts in Iraq and Afghanistan. Dr Dorman brilliantly illuminates the way in which the lack of clear political guidance from No. 10, inadequate cross-departmental coordination and inter-service rivalry compromised the mission. In the event, Dr Dorman shows how the British