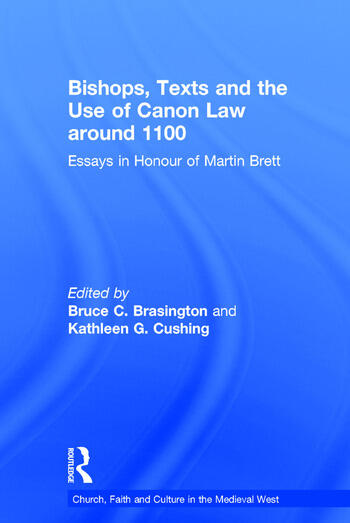 Bishops, Texts and the Use of Canon Law around 1100: Essays in Honour of Martin Brett

The essays in this volume in honour of Martin Brett address issues relating to the compilation and transmission of canon law collections, the role of bishops in their dissemination, as well as the interpretation and use of law in the eleventh and twelfth centuries. The studies are grouped thematically under the headings 'Bishops and Their Texts', and 'Texts and the Use of Canon Law'. These reflect important areas of contention in the historiographical literature and hence will further the debates regarding not simply the compilation and dissemination of canonical collections in the earlier middle ages, but also the development of the practical application of canon law within Europe, especially after c.1080. Individually, the contributors offer new viewpoints on key issues and questions relating to the creation of canonical texts, their transmission and use on both sides of the English Channel in the decades either side of the year 1100. Collectively, the essays explore the methods and motives of compilers, assess the use of law, find readers both in the compilation of texts and within their margins, and - perhaps most importantly - speculate where possible about the living communities in which these texts were compiled, copied and used.

’... an excellent tribute to [Martin] Brett, whose work has advanced the field of canon law in many respects.’ Ecclesiastical Law Journal

Bishops, Texts and the Use of Canon Law around 1100: Essays in Honour of Martin Brett