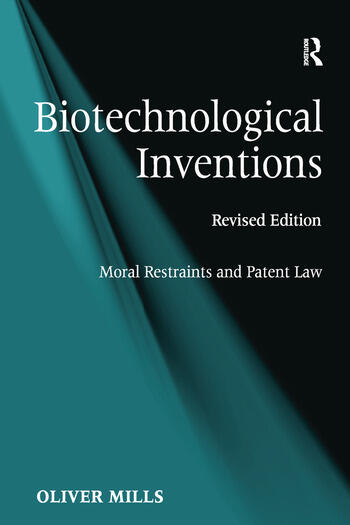 Advances in modern biotechnology have produced profound and far-reaching implications for the relationship between humans, animals and the environment. As a result, a debate has arisen surrounding the legal, moral and social problems connected with this technology, a central part of the debate focusing on the role of moral considerations in the patent system as a form of regulation. This fully revised and updated book examines this role and asks why in the context of biotechnological inventions, morality has become an important issue. It takes account of recent developments, including reference to the situation in Australia. By examining such specific recent cases, the author elucidates the moral concerns associated with modern biotechnology, thus providing an important contribution to the debate and a valuable resource for all those working in this exciting field.

Dr Oliver Mills teaches Law at the National University of Ireland, Galway. His interests are in the area of Intellectual Property Law - in particular moral issues associated with the patenting of biotechnological inventions. He has published widely on this and related subjects.

'Mills' book is rich in information and thought provoking engagement with the diverse and complex issues surrounding the patentability of biotechnological inventions. It explains and enlightens in equal measure and is a must-read for anyone interested in the subject.' Margaret Llewelyn, University of Sheffield, UK 'Biotechnological Inventions: Moral Restraints and Patent Law provides a roadmap for future research in the area of modern patent law. In this insightful, thought-provoking and thorough book, Mills provides a useful and timely introduction to the way that moral issues impinge on patents in Europe and the United States. It is an important and welcomed contribution to contemporary patent scholarship.' Brad Sherman, University of Queensland, Australia Reviews of 1st Edition: '...written in a clear manner...[with] a considerable degree of understanding of patent basics...this book is a level-headed and sober addition to the literature on this subject and will be of particular use to students.' European Intellectual Property Review 'The strength of this monograph lies in its detailed account of patent law harmonization in Europe, and how morality continues to play a significant role in the process' Health Sociology Review