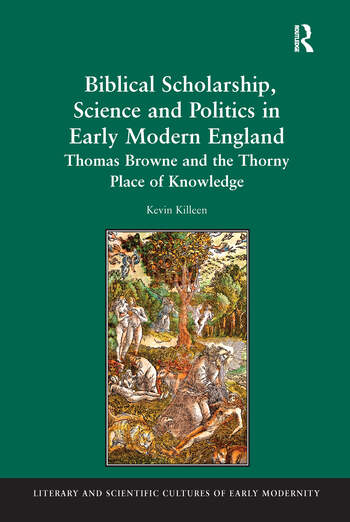 Kevin Killeen addresses one of the most enigmatic of seventeenth century writers, Thomas Browne (1605-1682), whose voracious intellectual pursuits provide an unparalleled insight into how early modern scholarly culture understood the relations between its disciplines. Browne's work encompasses biblical commentary, historiography, natural history, classical philology, artistic propriety and an encyclopaedic coverage of natural philosophy. This book traces the intellectual climate in which such disparate interests could cohere, locating Browne within the cultural and political matrices of his time. While Browne is most frequently remembered for the magnificence of his prose and his temperamental poise, qualities that knit well with the picture of a detached, apolitical figure, this work argues that Browne's significance emerges most fully in the context of contemporary battles over interpretative authority, within the intricately linked fields of biblical exegesis, scientific thought, and politics. Killeen's work centres on a reassessment of the scope and importance of Browne's most elaborate text, Pseudodoxia Epidemica, his vast encyclopaedia of error with its mazy series of investigations and through this explores the multivalent nature of early-modern enquiry.

Contents: Introduction: the thorny place of knowledge; 'The inconsiderable salarie of Judas': Biblical historiography and law; The community of this fruit: commentary, curiosa and chronology; Subtle seeds and agile emanations: natural philosophy, religion and witchcraft; 'The doctor quarrels with some pictures': Browne's fabulous animals; The politics of painting; Conclusion; Bibliography; Index.

Kevin Killeen is a lecturer in Early Modern English Literature at the University of York, UK.

Prize: Winner, Council for College and University English Book Award, 2010 Shortlisted for the History of Science Society Watson Davis and Helen Miles Davis Prize 2010 ’The Thorny Place of Knowledge shows new sides to Browne's religious, scientific and rhetorical practices. Its particular strengths are its revisonary focus on Browne's thought in Pseudodoxia and its ability to tease out unexpected details that illuminate larger patterns of though and experience in the second half of the seventeenth century.’ Renaissance Quarterly ’Browne is a pivotal figure, and Killeen’s book shows where Browne’s writings reveal some of the fault-lines in the intellectual culture of seventeenth-century England. Browne was also a very subtle writer, and the critic must delve below the smooth surface of his prose to see where he papers over the cracks in his philosophy. Kevin Killeen is a careful reader of Browne’s prose, and he offers us an instructive lead in this task.’ British Society for Literature and Science ’The sophistication and wealth of detail in this well-argued book preclude a fair summary in a brief review. ... This excellent book, then, will be of interest to scholars across disciplines, especially those engaged in the history of science, the history of ideas, and literary criticism. Killeen seems to have mastered all of the relevant traditional and recent scholarship...’ 1650-1850: Ideas, Aesthetics, and Inquiries in the Early Modern Era ’...Killeen’s study is essential reading for anyone interested not just in early modern English biblical scholarship and science, but also the curious byways of learning.’ Sixteenth Century Journal