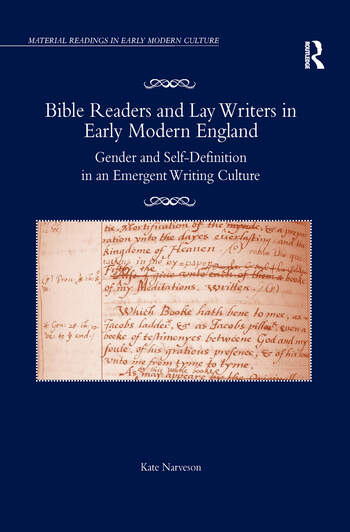 Bible Readers and Lay Writers in Early Modern England studies how immersion in the Bible among layfolk gave rise to a non-professional writing culture, one of the first instances of ordinary people taking up the pen as part of their daily lives. Kate Narveson examines the development of the culture, looking at the close connection between reading and writing practices, the influence of gender, and the habit of applying Scripture to personal experience. She explores too the tensions that arose between lay and clergy as layfolk embraced not just the chance to read Scripture but the opportunity to create a written record of their ideas and experiences, acquiring a new control over their spiritual self-definition and a new mode of gaining status in domestic and communal circles. Based on a study of print and manuscript sources from 1580 to 1660, this book begins by analyzing how lay people were taught to read Scripture both through explicit clerical instruction in techniques such as note-taking and collation, and through indirect means such as exposure to sermons, and then how they adapted those techniques to create their own devotional writing. The first part of the book concludes with case studies of three ordinary lay people, Anne Venn, Nehemiah Wallington, and Richard Willis. The second half of the study turns to the question of how gender registers in this lay scripturalist writing, offering extended attention to the little-studied meditations of Grace, Lady Mildmay. Narveson concludes by arguing that by mid-century, despite clerical anxiety, writing was central to lay engagement with Scripture and had moved the center of religious experience beyond the church walls.

'... a really tremendous piece of scholarship: subtle, humane, insightful and - when it needs to be - biting.' Alec Ryrie, Durham University, UK 'Narveson's book is an energetic blend of different disciplines, tackling literature, religious history, book history and gender studies all at once, with remarkable nerve and considerable subtlety... There is a delicate and illuminating account of women's writing here; there is also new understanding of how early modern texts might be read.' Times Higher Education 'I found this book highly thought provoking. Ultimately it engages with a persistent and perplexing critical paradox: how do twenty-first-century scholars attempt to ’locate the marks of gender’ (132) within a set of early modern texts whose overriding objective is to erase any sense of self?' Renaissance Quarterly '... this is a sophisticated and engagingly lively discussion that ranges impressively through the primary and critical sources involved - perhaps more so than Narveson recognizes herself.' Seventeenth-Century News 'With sensitivity for the complexities of both lived religious experience and the intersections of popular and academic cultures, Nerveson shows that unpublished devotionals are far from uninteresting. This volume offers much to the study of early modern religion, whether in England or elsewhere. It deserves to be widely read.' Sixteenth Century Journal ’...provides a carefully considered analysis of lay devotional writing and the authors, particularly the women, who shaped and were shaped by it... Naverson [has] a keen eye for significant detail that she combines with breadth of research and sober judgment...’ John Donne Journal '... an excellent addition to this burgeoning field of study. ...Bible Readers and Lay Writers in Early Modern England has many impressive strengths.' Modern Philology 'With a sure hand, Kate Narveson surveys the whole circuit of reading and writing strategies surrounding Scripture literacy amon