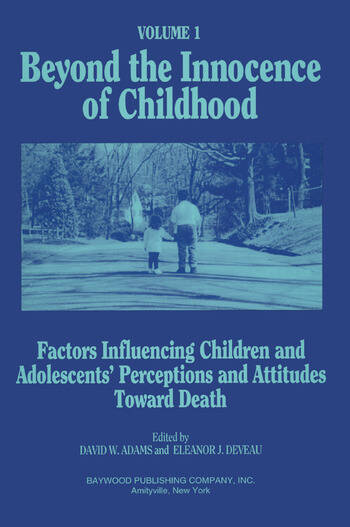 Beyond the Innocence of Childhood: Factors Influencing Children and Adolescents' Perceptions and Attitudes, Volume 1

Death is not a mere possibility but a certainty for all of us. Yet, today's society unrealistically portrays childhood as a time of unremittant joy and freedom. Unfortunately, the reality of life may suddenly bring children face to face with tragic circumstances such as the death of their pet, the terminal illness of their parent, their own struggle with life-threatening disease, the accidental death of their sibling, or the suicide of a friend. The gravity of any of these situations takes children beyond the innocence of childhood and plunges them into a world that is frightening and full of uncertainty. Unfortunately, our perceptions and attitudes toward death do not equip children with the tools to help them cope adequately with such overwhelming experiences.

Beyond the Innocence of Childhood is a collection of forty chapters which are divided into three separate volumes. The overall purpose of this series is to answer the question: How do we as educators, clinicians, other professionals, and parents help children and adolescents deal with threat to their lives, dying, death, and bereavement?

In this three volume set the editors have brought together a number of well-known educators, researchers, and practitioners who share their knowledge and expertise concerning the care and well-being of children and adolescents.

SPECIFIC TO VOLUME 1
Children explore the world around them through spontaneous, and later, structured learning, acquire knowledge, learn to understand themselves, establish their role in the family, develop peer and adult relationships, and find their place in the world. However, today's society does not include death as part of this developmental process. Unfortunately, such avoidance may negatively influence children's ability to acquire an understanding of the concepts of death and to develop positive attitudes toward death.
Highlights of this section include:
Answering children's questions
Children and death--past, present, and future
Gender differences
Teachable moments
Perceptions of death, cognitive development, and children's artwork
The second part of volume 1 examines influences in today's society that potentially impact on children and adolescents' perceptions and attitudes toward life-threatening illness and death. This volume offers readers valuable insights into the various factors which ultimately affect children's ability to achieve a mature understanding of death. Features include the following:
Violent death in a popular culture and the media
Political conflict and war
The epidemic of AIDS
Cultural differences in the management of life-threatening illness
Death rituals and funeral ceremonies

Beyond the Innocence of Childhood: Factors Influencing Children and Adolescents' Perceptions and Attitudes, Volume 1