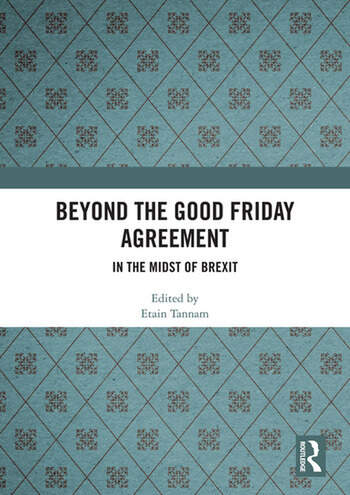 Beyond the Good Friday Agreement: In the Midst of Brexit

The volume comprises chapters from leading academics in the fields of Northern Irish and comparative politics who deal with economic and political aspects of the Good Friday Agreement, making an original contribution to the current debates on conflict resolution. It provides a theoretical framework by renowned expert on consociationalism, Brendan O’Leary, as well as a chapter on the British-Irish Relationship in the 21st Century by renowned Northern Ireland specialist John Coakley.

This book was originally published as a special issue of Ethnopolitics.

4. The EU’s Influence on the Peace Process and Agreement in Northern Ireland in Light of Brexit Katy Hayward and Mary C. Murphy

5. Brexit, Bordering and Bodies on the Island of Ireland Cathal McCall

6. The British–Irish Relationship in the Twenty-first Century John Coakley

7. Postscript: New British Questions or 2019 And All That! Brendan O’Leary

Beyond the Good Friday Agreement: In the Midst of Brexit