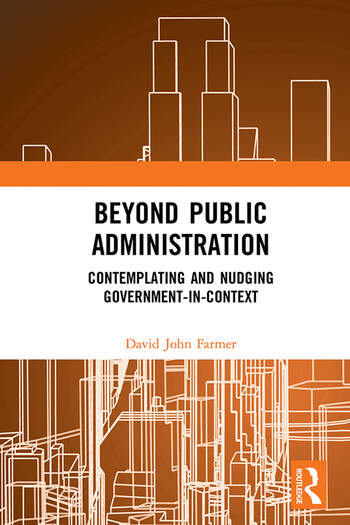 How can public administration (P.A.) nudge government to govern fundamentally better in terms of policy? How critical is P.A. contemplation and nudges – prods, shoves or hammer blows - to government-in-context?

In this book, David John Farmer argues that government-in-context refers to government-in-totality, to what governs even if not called government and to what constrains government action. Constricting contextual features are infiltration, exfiltration and post-truth, raising questions relating to democracy. Infiltration into government is the action of gaining access that benefits big corporations, their owners and billionaires; findings are that it also mal-nudges government action through such elements as big money, lobbying, tax breaks and embrace of the free market. Reacting to factors like growing income inequality, what is explained as exfiltration occurs for middle- and lower-income people. Post-truth is noted as the Oxford Dictionary’s word of the year for 2016, describing people concerned less with truths than with opinions. The book analyzes three practical "hammer blow" and 18 "shove" nudges to contradict the mal-nudges.

Beyond Public Administration will be of interest to P.A. scholars and graduate students, more specifically those interested in critical, normative, or interpretive scholarship focused on various aspects of P.A. theory, governance, and practical management.

David John Farmer is Professor Emeritus of Philosophy and Public Affairs at the L. Douglas Wilder School of Government and Public Affairs, Virginia Commonwealth University (VCU). Prior to joining VCU in 1980, Dr. Farmer served as a budget analyst, an administrative analyst and an economist. He also served as director of operations management, special assistant to the New York City police commissioner and as a division director for the National Institute of Justice in the U.S. Department of Justice. Farmer has authored six books and 85 refereed articles and book chapters, and served as a member of four editorial boards.

"A brilliantly conceived, much needed manifesto! Informed by the latest theory concepts and solidly grounded in practical experience, this book provides a vivid account of the problematic situation in 21st Century America and its institutions of governance – and Farmer, an ex-public administrator and eminent scholar, knows what to do about it. The book is relevant to both the public administration community (currently under attack as the "deep state") as well as concerned citizens." — Orion White, Professor Emeritus, Virginia Tech University

"Efficiency requires consistent patterns; Effectiveness requires breaking patterns; Farmer critiques American governance and lays out a significant role for PA in rebuilding the system. Wisdom on reforming US governance from a former practitioner whom many scholars regard as the leading contemporary theorist in PA." — Bob Cunningham, Professor Emeritus of Political Science, University of Tennessee, Knoxville

"In a time of mistrust in the capacities of governments and public administrations to properly provide, a new book by David John Farmer is an alert for hope and celebration. This book is out of the ordinary, made not of answers but of questions. To examine the complex condition of public life, Farmer elaborates the notion of Government-in-context, tensed by crucial maladies like infiltration, exfiltration and post-truth. Farmer invites you and me to contemplate our possibilities, and advances a vocabulary to facilitate the conversation among us. This is a book about David Farmer`s own process of thought, in a long a qualified career as scholar and practitioner, thinking and re-thinking on the questions that reformulate themselves in the process of answering them, as manifest in all his previous written and non-written texts. Yet it is about you and me, confronting or falling into resignation against the maladies of Government-in-context. It is also about contemplation, the necessary form of reflexive imagining that should precede any other stimulating action devoted to comprehending and improving public life." — Ricardo Schmukler, Professor, University of Buenos Aires