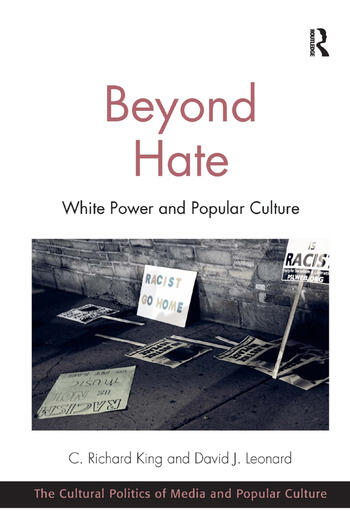 Beyond Hate offers a critical ethnography of the virtual communities established and discursive networks activated through the online engagements of white separatists, white nationalists, and white supremacists with various popular cultural texts, including movies, music, television, sport, video games, and kitsch. Outlining the ways in which advocates of white power interpret popular cultural forms, and probing the emergent spaces of white power popular culture, it examines the paradoxical relationship that advocates of white supremacy have with popular culture, as they finding it to be an irresistible and repugnant reflection of social decay rooted in multiculturalism. Drawing on a range of new media sources, including websites, chat rooms, blogs and forums, this book explores the concerns expressed by advocates of white power, with regard to racial hierarchy and social order, the crisis of traditional American values, the perpetuation of liberal, feminist, elitist ideas, the degradation of the family and the fetishization of black men. What emerges is an understanding of the instruments of power in white supremacist discourses, in which a series of connections are drawn between popular culture, multiculturalism, sexual politics and state functions, all of which are seen to be working against white men. A richly illustrated study of the intersections of white power and popular culture in the contemporary U.S., and the use of use cyberspace by white supremacists as an imagined site of resistance, Beyond Hate will appeal to scholars of sociology and cultural studies with interests in race and ethnicity, popular culture and the discourses of the extreme right.

"Timely, insightful and clearly written, this book is an essential read for anyone interested in the many ways that white nationalists deploy popular culture for expression of their racist ideas and fantasies. King and Leonard brilliantly show and discuss the interface and connections between white nationalist discourse and the mainstream."— Katharine Tyler, University of Exeter, UK

"Beyond Hate: White Power and Popular Culture is an original and innovative study that makes an important contribution to work on the extreme right, white supremacism and hate groups. It adds a new dimension to existing work by examining such movements, not only in relation to mainstream politics and ideology, but in relation to mainstream popular culture (often the target of their hatred), their consumption of and engagement with it, as well as their own cultural production. Thus, beyond work on hate and extremism, this book also makes an important contribution to and will appeal to scholars working in sociology of race and ethnicity, cultural studies and media studies."— Aaron Winter, University of Abertay Dundee, UK

"The author`s detailed and extensive collection and analysis of online discussions within the white nationalist community covers every major popular culture battleground. The main significance of this study, however, lies in its detection of the interconnectedness of the nexus of popular culture, hegemonic power, and racial politics. This rich and insightful monograph is indispensable for a more comprehensive understanding of racial discourses in contemporary US society."— Robert A. Winkler , KULT_online. Review Journal for the Study of Culture

"King and Leonard’s book is a timely piece of research on the ways in which new media sources serve as sites for the reproduction of racist discourses that are themselves produced in the mainstream of popular culture...  there is enough ethnographic richness and critical analysis here for the book to be a valuable contribution to a growing field."— Karl Spracklen, Leeds Beckett University, UK, Cultural Sociology