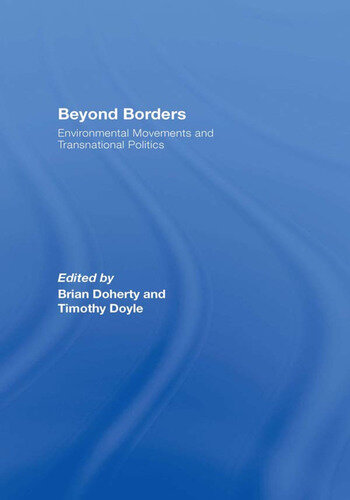 Globalisation is about transnational politics. While nation-state governments increasingly struggle with this new politics, which moves beneath, between and beyond national borders, others entities like transnational corporations have flourished. But it is not just business which increasingly bypasses these traditional boundaries. Environmental groups are also moving though this transnational space, and their politics are defined by such qualities as fluidity, ambiguity and rapid changes in identity, mission and structure. In this book, the politics of environmental movements are presented as particularly salient examples of these new phenomena.

6) Neither 'North' nor 'South': The Environment and Civil Society in Post-conflict Bosnia-Herzegovina - Adam Fagan

11) Green Public Spheres and the Green Governance State: The Politics of Emancipation and Ecological Conditionality - Timothy Doyle and Brian Doherty

Brian Doherty is a Senior Lecturer in Politics at Keele University. He teaches courses on social movements, political sociology and environmental politics. His recent publications include Ideas and Actions in the Green Movement, and Direct Action in British Environmentalism (co-edited with Ben Seel and Mat Paterson). He has been active in environmental and peace groups In Britain and Ireland since the early 1980s.

Timothy Doyle is a Professor of Politics and International Relations at Keele University, where he teaches global political economy and environmental politics. His most recent works include the books: Environment and Politics, (third edition); Environmental Movements in Minority and Majority Worlds: A Global Perspective and Crucible for Survival: Environmental Justice and Security in the Indian Ocean Region. He has been a dedicated environmental and human rights activist since the late 1970s. He is currently serving as President of the Ecopolitical Association of Australasia, and Director of Human and Environmental Security for the Indian Ocean Research Group.