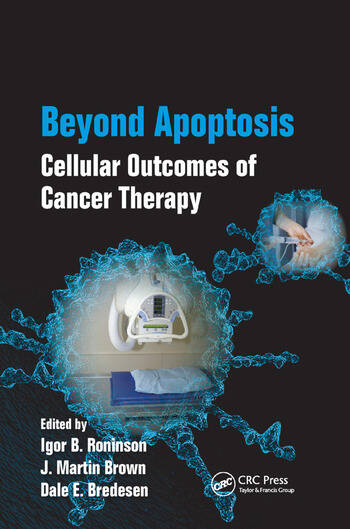 Addressing a major field of interest for oncologists, cell biologists, and other biomedical researchers, Beyond Apoptosis provides an overview of how different biological mechanisms of cell death, senescence and mitotic catastrophe stop the growth of tumor cells treated with anticancer agents.

IGOR B. RONINSON is Director of the Cancer Center, Ordway Research Institute, and Adjunct Professor at Albany Medical College, Rensselaer Polytechnic Institute, and State University of New York at Albany, Albany, NY, USA. Dr. Roninson received his Ph.D. in Biochemistry from the Massachusetts Institute of Technology, Cambridge, Massachusetts, USA. He is a member of the American Association for Cancer Research and Associate Editor of several journals in the field of cancer. Dr. Roninson is an accomplished journal contributor, invited lecturer, and inventor. He has been honored with several awards, including the AACR Award for Meritorious Achievement in Cancer Research. His major fields of research are mechanisms of cancer drug resistance and sensitivity, cell senescence in cancer and aging, and drug target identification through functional genomics.

J. MARTIN BROWN is Professor of Radiation and Cancer Biology, Stanford University, Palo Alto, California, USA. Dr. Brown obtained his Ph.D. in Radiation and Cancer Biology from Oxford University, Oxford, UK. He is active member of the American Association for Cancer Research and the Association for Radiation Research, and he serves as chair of the External Advisory Committee of Radiation Leukemogenesis NSCOR. Dr. Brown has received the Henry S. Kaplan Distinguished Scientist and other influential awards, such as the Radiation Research Society Failla Award. His major fields of interest and research are molecular determinants of tumor response to therapy, tumor hypoxia, hypoxic cytotoxins, gene therapy, DNA repair, and genomic instability.

DALE E. BREDESEN is Director and CEO, Buck Institute for Age Research, Novato, and Adjunct Professor, The University of California, San Francisco, California, USA. Dr. Bredesen received his M.D. from Duke University Medical Center, Durham, North Carolina, USA. He has been the recipient of many awards, including the Arthur Cherkin Award for Research in N