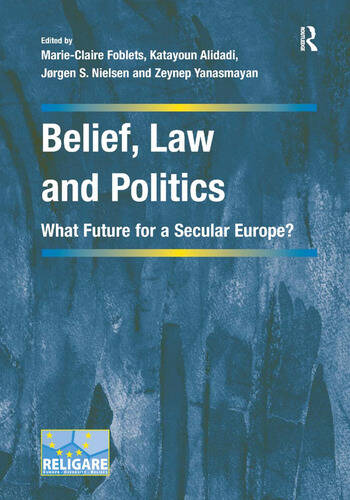 Belief, Law and Politics: What Future for a Secular Europe?

This edited collection gathers together the principal findings of the three-year RELIGARE project, which dealt with the question of religious and philosophical diversity in European law. Specifically, it covers four spheres of public policy and legislation where the pressure to accommodate religious diversity has been most strongly felt in Europe: employment, family life, use of public space and state support mechanisms. Embracing a forward-looking approach, the final RELIGARE report provides recommendations to governance units at the local, national and European levels regarding issues of religious pluralism and secularism. This volume adds context and critique to those recommendations and more generally opens an intellectual discussion on the topic of religion in the European Union. The book consists of two main parts: the first includes the principal findings of the RELIGARE research project, while the second is a compilation of 28 short contributions from influential scholars, legal practitioners, policy makers and activists who respond to the report and offer their views on the sensitive issue of religious diversity and the law in Europe.

Marie-Claire Foblets is Professor of Law at the University of Leuven, Belgium, and Director of the Department of Law & Anthropology at the Max Planck Institute for Social Anthropology in Halle/Saale, Germany. She has held various visiting professorships both within and outside Europe. She has conducted extensive research and published widely on issues of migration law, including the elaboration of European migration law after the Treaty of Amsterdam, citizenship/nationality laws, compulsory integration, anti-racism and non-discrimination. In the field of the anthropology of law, her research focuses on cultural diversity and legal practice, with a particular interest in the application of Islamic family law in Europe, and more recently in the accommodation of cultural and religious diversity under state law. Katayoun Alidadi is a legal scholar affiliated with the Leuven Institute for Human Rights and Critical Studies at the KU Leuven, Belgium. She is co-editor, together with Marie-Claire Foblets and Jogchum Vrielink, of A Test of Faith? Religious Diversity and Accommodation in the European Workplace (Ashgate, 2012) and was a project researcher in the FP7 RELIGARE project (2010-2013). Her research focuses on religious freedom, anti-discrimination law and reasonable accommodations in the workplace, in particular with regard to Europe and North America. She obtained her law degree from KU Leuven and holds an LLM in International Legal Studies from Harvard Law School (2005). She has worked as a corporate attorney at an international law firm in Brussels and as a public interest attorney at Public Counsel Law Center in Los Angeles. A member of the bars of New York and California, she currently resides in the US. Zeynep Yanasmayan is a researcher at the European University Viadrina, Germany. She received her PhD from the Faculty of Social Sciences at KU Leuven and previously worked as a postdoctoral research fellow at the Max Planck Institute for the Study of Religious

'RELIGARE was an important project on an important topic for contemporary Europe, namely legal adaptation to the new and growing religious diversity. This book summarises the key findings of the project and throws the doors open to thirty responses from legal, political science and sociology scholars as well as activists, legal practitioners and policy makers, including some of the leaders in the field. The result is a state of the art compendium.' Tariq Modood, University of Bristol, UK 'The RELIGARE project has produced this full, illuminating and stimulating book on the legal issues revolving around the ever-increasing religious diversity in Europe. The more unsettled our continent and world become, the more important it is to hear and heed the results of RELIGARE’s work on the large themes and broad prospects which are explored here with such care. This book should be in the hands of legislators, jurists, scholars and students.’ Robin Griffith-Jones, King's College London, and Master of the Temple, London, UK ’The RELIGARE project stands as a milestone in the contemporary debate on the role of religion in the public square. Far from being deferential, this book is a thorough critique of the RELIGARE findings and policy implications. The authors offer a remarkable piece of expertise and an invitation to go further.’ Marco Ventura, University of Leuven, Belgium

Belief, Law and Politics: What Future for a Secular Europe?