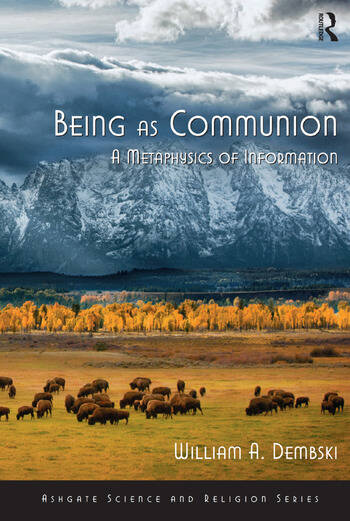 Being as Communion: A Metaphysics of Information

For a thing to be real, it must be able to communicate with other things. If this is so, then the problem of being receives a straightforward resolution: to be is to be in communion. So the fundamental science, indeed the science that needs to underwrite all other sciences, is a theory of communication. Within such a theory of communication the proper object of study becomes not isolated particles but the information that passes between entities. In Being as Communion philosopher and mathematician William Dembski provides a non-technical overview of his work on information. Dembski attempts to make good on the promise of John Wheeler, Paul Davies, and others that information is poised to replace matter as the primary stuff of reality. With profound implications for theology and metaphysics, Being as Communion develops a relational ontology that is at once congenial to science and open to teleology in nature. All those interested in the intersections of theology, philosophy and science should read this book.

A philosopher and mathematician, William A. Dembski is a senior fellow with Discovery Institute's Center for Science and Culture as well as a research scientist with the Evolutionary Informatics Lab. A cross-disciplinary scholar, he has published widely in the mathematics, engineering, philosophy, and theology literature, and is the author/editor of more than 20 books. Being as Communion ties together two decades of his research on the relation between teleology and information.

’This is a clear, fresh, stimulating, and provocative book. I enjoyed reading it, and recommend it to anyone who would like to think more deeply about information, evolution and creativity.’ Rupert Sheldrake, University of Cambridge, UK 'Being as Communion is a masterpiece. Dembski's treatment of information is deep, rich and staggeringly original, gathering together many different threads from theology, philosophy and science. In an intellectual world that prizes outrageous proposals, Dembski modestly seeks to turn the world upside down by making the case that information is more fundamental than matter or energy. He thereby illuminates the primacy of mind in the cosmos. This book is a fresh and significant threat to materialist imperialism.’ Mark Fitzmaurice, General Medical Practitioner, Sydney, Australia ’William Dembski is one of the most original and rigorous thinkers of his generation, and his new book, Being as Communion, pulls together in a satisfying way the many threads in the theory of design and information that he has developed over the last 15 years. Philosophical and theological critics of the intelligent design� movement need to read this book, since here Dembski definitively smashes the common caricatures and misrepresentations of the movement, including the notion that ID is committed to a metaphysics that is mechanist, dualist, interventionist, or occasionalist. Dembski argues persuasively that information cannot be simply identical with its physical manifestations, and that the concepts of information and teleology are indispensable tools for the contemporary metaphysician.’ Robert C. Koons, University of Texas - Austin, USA ’The first Scientific Revolution was the recognition that the book of nature was written in mathematics. The second Scientific Revolution - that the chapter on biology is written in information theory - is taking place in our lifetime. Biology is replete with information, from the genetic code and intrica

Being as Communion: A Metaphysics of Information